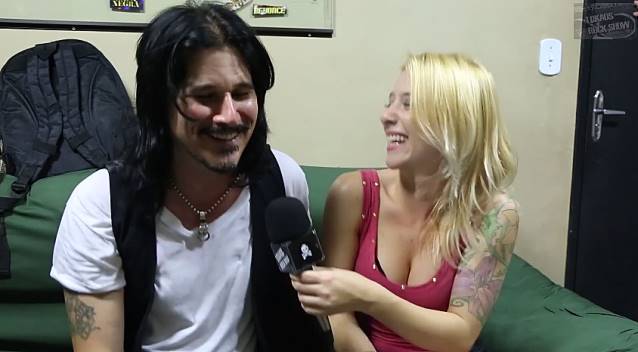 On November 15, Dani Buarque of the "Lokaos Rock Show" conducted an interview with former GUNS N' ROSES guitarist Gilby Clarke at the Carioca Club in São Paulo, Brazil. You can now watch the chat below.

Clarke and fellow former GUNS N' ROSES members Slash, Duff McKagan, Steven Adler and Matt Sorum performed three "Appetite For Destruction" songs with Myles Kennedy at the band's Rock And Roll Hall Of Fame induction ceremony in April 2012 in Cleveland, Ohio. Kennedy, who handles lead vocals in Slash's solo band and ALTER BRIDGE, sang "Mr. Brownstone", "Sweet Child O' Mine" and "Paradise City", with "Use Your Illusion"-era member Sorum sitting behind the drum kit on "Brownstone" and the man he replaced in GN'R, Adler, pounding the skins for the other two songs.