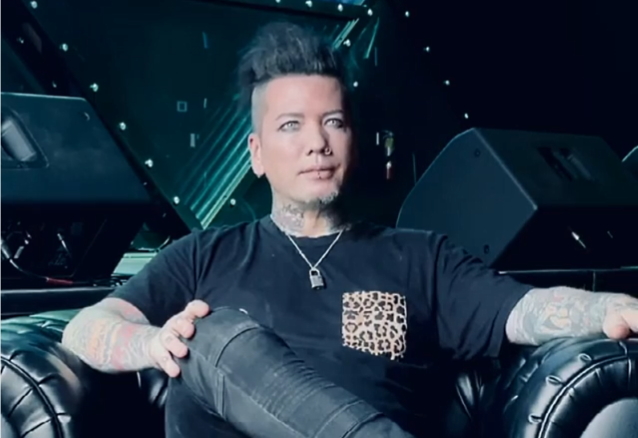 Former GUNS N' ROSES and current SIXX:A.M. guitarist DJ Ashba has shared a new video in which he discusses the upcoming live show from his ASHBA project, which mixes his rock guitar with electronic music in what he previously described as the "perfect blend of rock and EDM."

"What I wanna do is just bring a super high-energy not only audio but visual — just super high-energy," he said (as transcribed by BLABBERMOUTH.NET). "Where do you go from where I've been? I've played with some of the biggest players in the industry — GUNS N' ROSES, SIXX:A.M. to Neil Diamond… I've been very fortunate. I got to work with a lot of great people. I just worked with Debbie Gibson who's a dear friend. And where do you go from that? I could start another rock band, but I have SIXX:A.M. So, creatively, I wanted to really step way outside of my comfort zone. So bringing a show to the fans — something so different than they've ever seen — was super important to me. The bar is set very high, but we're just dumping every bit of creativity into the look, the sound, the feel.

"I'm at that age where I just wanna throw a huge, massive party every time I walk on stage," he added. "And what's great about this is there's zero drama. It's just creative, it's fun and it's exciting."

Last December, Ashba told "The Mark And HooGie Show" that he isn't concerned about getting any pushback from his rock fans over the musical direction of his new venture: "Honestly, I'm at a point in my career where I could give two fucks," he said. "I could care less. If people don't like it, kiss my ass. Go listen to SIXX:A.M. If what I'm doing right now isn't rock enough, I've got a rock band. They can go listen to that then.

"My fanbase, thank God, has been, throughout my whole career, just very, very accepting," he continued. "They know me — they know I'm always trying to really push myself as an artist outside the box.

"If I had to live within this box, I'd rather honestly not play music. Playing music is a form of art, and if I can't truly be an artist and be true to what it is inside — whatever that is that keeps me going… I have to stay inspired. You can only write so many three-chord rock songs. So, to me, this is something that I'm kind of more doing for myself, and I feel like I kind of have earned that at this point in my career. And I'm just having fun.

"Surprisingly… It was weird. I was totally expecting for all my fanbase just to hate it — not get it," Ashba added. "'Cause I really, really go deep down in EDM — I stayed very, very true to the EDM sound — and I really thought they were gonna hate it, and I was okay with that. 'Cause in my mind, I'm writing this for the EDM, the young kids that go to those festivals. This is full-on festival music. And surprisingly, I got no pushback. My rock fans really, really were freaking out on it, which kind of freaked me out. I was expecting them to really not get it or maybe push it aside. But they've been nothing but supportive. I'm very thankful that they gave it a chance."

"Hypnotic" and "Let's Dance" will appear on ASHBA's first full-length effort. According to DJ, he will promote the LP by embarking on a tour on which he will be joined only by a VJ.

Ashba told the Las Vegas Review-Journal about the musical approach of his new effort: "I would go to a lot of EDM concerts, and their shows are so over the top and, you know, all these young kids just losing their minds, right? And the one thing that I've noticed is … it lacks guitar, you know, and I saw an opportunity, like five years ago, going, 'If I could take what I do and somehow inject it into this world.' A lot of kids are not being exposed to a lot of guitar in that world."