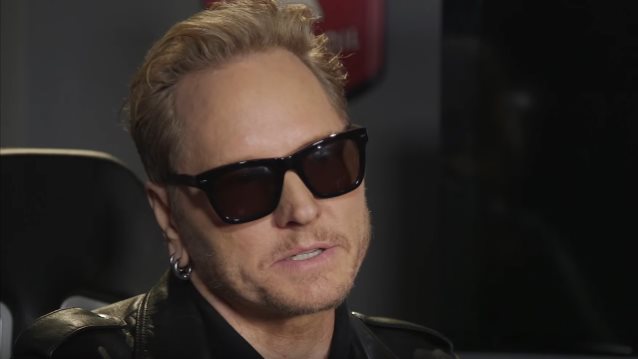 Jason Price of Icon Vs. Icon recently conducted an interview with former GUNS N' ROSES and current KINGS OF CHAOS drummer Matt Sorum. A couple of excerpts from the chat follow below.

Icon Vs. Icon: What is the key to longevity for a career in music?

Sorum: "People say, 'Matt has been in all these big bands, he's gotten into the Rock And Roll Hall Of Fame and won a Grammy. What next?' Like I said, it still holds true, I don't have any other job identification! [Laughs] I'm starting to dabble in other things really late in my life. I'm starting to diversify and you get into other aspects. I have fallen into interesting projects that aren't music related but becomes something that I have gained because I have a music career. I think the biggest thing it comes down to is perseverance and sheer tenacity. I say to young musicians, if you even think you can stand a chance in this business, you're going to have to work harder than you've ever worked in your life. This isn't easy. If it was easy, there would be way more bands then we can handle. It's a difficult business, the music business. First you have to learn the pitfalls and the politics of it. You're dealing with a lot of personalities, the business, trying to stay credible, trying to have success and trying to have successful songs. I've had other musicians or drummers ask me, 'Man, you have had a great career as a drummer. How do you do it?' You know what? I put myself out there, I stay positive, I try to stay professional and be on time. You know, I had little bumps in the road like everyone has in life but you just keep trucking. Keep putting one foot in front of the other and believe in yourself."

Icon Vs. Icon: You created a tremendous body of work. How have you most evolved?

Sorum: "I learned a lot along the way. When I first came into bands, I didn't know anything about the business part of it. I just wanted to play drums and learned the hard way, a few times, what it meant to look out for yourself. As a drummer, you are sort of one of the last people that people go to. Traditionally, they say, 'We need a singer. We need a guitar player. The rest of these guys, whatever.' A drummer tends to be a replaceable guy and a guy who is sort of put in the back. How was I going to build my career being someone people recognized with my name in the history books or maybe even in the top one hundred rock 'n' roll drummers? I think that comes with being in the great bands. I got myself in great bands and I chose the band I was in. They chose me as well as me choosing them. I was asked to join THE CULT. I was asked to join GUNS N' ROSES. I was called by Slash and he asked me to join the band. I didn't chase him down. I had to make the decision of, 'Is this a good move for me career-wise to go into that band?' It ended up being a great career choice! That career choice brought me into other bands because I had that pedigree and I had that legacy. NEUROTIC OUTSIDERS and VELVET REVOLVER stemmed from that. We had major success with that band — three million records sold, Grammys, etc. that came out of that, so as a drummer I have made some good decisions. I didn't play in every band, and I don't want to name some names, but I got called for some bands that were big but they weren't the right kind of band that I would have longevity. If you look at great actors, guys like Johnny Depp, they have a career that lasts a long time, it's because he chooses the right projects to be involved in and that will build his career, his integrity and what he chooses to do as a musician. To this day, I still try to put myself with the best people possible. I reach out to people who I think, naturally, I might think, 'Oh, man, he's not going to answer my phone call.' But you still try! 'I'm going to call Billy Gibbons or Robin Zander. I'm going to call Steven Tyler. I'm going to call these guys!' Then you find them saying yes to something you asked him about and you're like, 'Oh my God! Anything is possible!' Now, you're on stage playing with these guys who you grew up looking up to. So, it's a whole other level of unexpected grandeur of rock 'n' roll. I couldn't ask for more in my career now, being in a band, it's maybe not super well-known but musically and artistically speaking, I'm right where I should be! I was there at the height of THE CULT, GN'R and VELVET REVOLVER and now I am building a project. I'm building something new that is an exciting challenge that keeps your blood flowing! I'm playing with my peers and challenging myself. That's what keeps me moving."