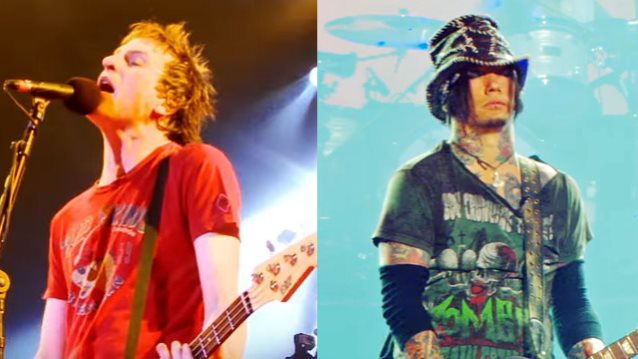 Former GUNS N' ROSES bassist Tommy Stinson says that he found it "funny" that guitarist DJ Ashba "made such a big deal about" quitting the band at a time when "there wasn't really anything going on" with the group.

Stinson, who was in GUNS N' ROSES from 1998 until 2014, made his comments during a brand new interview with HardrockHaven.net.

Asked if he foresaw singer Axl Rose reuniting with guitarist Slash and bassist Duff McKagan, Tommy said: "If you asked me if it would happen, I would have said, 'Definitely wouldn't be happening.' But I think that… I think that due to some of the things that happened towards the end when I was in the band… From my part in it, I wasn't able to tour for a while because of my family situation at home was very unstable. I had to take care of some shit. So I had basically had to turn down… I think it might have been as many as five different tours that they wanted to do. And this that and the other thing, I just couldn't do it. And then DJ quit… When DJ made it official he was 'quitting GUNS N' ROSES' or whatever, I think that was pretty, 'Okay, well, guess we'll move on from this chapter and get back with the old guys.' I mean, seems to me there might have been some other weird stuff going on in there that I wasn't party to, but I'm glad they did it. I think it was important that they did. They're having a ball and fucking killing it. I've seen two shows. They're great. They're all really happy and it seems to be drama free."

Asked if he knew that Ashba was going to leave GUNS N' ROSES before he made the announcement, Stinson laughed and said: "You know, he called me up on the phone and told me that he was gonna quit, you know, and this that and the other thing. I just kinda got to thinking… It was funny that he made such a big deal about it, because there wasn't really anything going on [with the pre-reunion incarnation of GUNS N' ROSES]. He seemed like it was kind of inevitable that there was going to be a reunion happening, so I think he… I don't know if he [laughs] tried to get in front of the curve to, you know, drum up some extra fucking press for himself. I don't really know what the deal was, but I thought it odd. I thought it an odd time to make a big stink about quitting, you know?"

Ashba, who joined GUNS N' ROSES in March 2009 following the departure of Robin Finck, issued a statement in July 2015 saying that he was leaving GUNS N' ROSES "to dedicate myself to my band SIXX: A.M., my adoring wife and family, and to the many new adventures that the future holds for me."

He told Rolling Stone that his departure from GUNS N' ROSES happened after his marriage "went fuckin' south in a bad, bad way" forcing him to become a "fuckin' full-time dad — and happily a full-time dad."