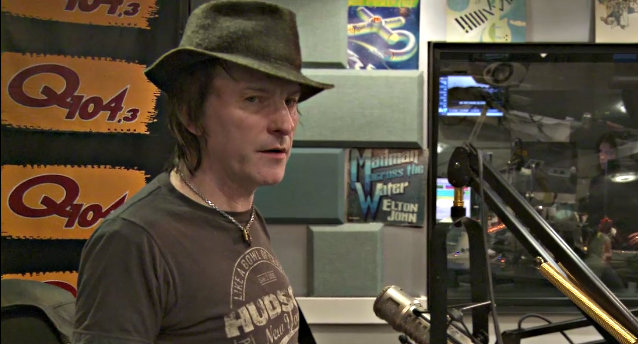 Former GUNS N' ROSES bassist Tommy Stinson has confirmed that his personal problems led to his departure from the band.

Stinson, who was in GN'R from 1998 until 2014, previously told Rolling Stone magazine that his split with the group happened after his marriage "went fuckin' south in a bad, bad way" forcing him to become a "fuckin' full-time dad — and happily a full-time dad."

During a recent appearance on Q104.3's "Out Of The Box" with host Jonathan Clarke, Stinson stated about his time with GUNS N' ROSES (see video below): "It was a good gig for me; I won't josh you on that. It was kind of weird. It was a troubling bit. I really literally had to turn down some tours with them and they got kind of frustrated with that, I think, that I couldn't go out. And I just kind of had to walk away because my circumstances were so bleak at home, and I had to just deal with it."

He continued: "Every musician, probably, that gets to any sort of place in their life where they're doing okay will probably attest, when you start to try to have family and kids, it gets real hard."

Asked if he was surprised to see GUNS N' ROSES singer Axl Rose reunite with guitarist Slash and bassist Duff McKagan for the "Not In This Lifetime" tour, Tommy said: "I kind of was, but not really, given the nature of what was going on. You know, like anyone, Axl has to work too, and they've all got their stuff — everyone's got their stuff that they do. But, when it comes right down to it, the dude can't just afford to sit around on his butt and do nothing. So he did the right thing — I think he totally did the right thing — and I think they're having a ball. I'm in contact with them every now and then. I shoot them texts, like, 'How're you guys doing out there? What's going on?' It's because I left it in the best way I possibly could, and I'm happy for 'em. You know, I've got a lot of friends in that group."

Stinson added that he "went and saw a couple" of the shows on the "Not In This Lifetime" tour "and had a great time seeing them. They're all still friends of mine," he said. "The only one I really don't know… I don't know Slash; I don't think I've ever met him before, although there's some people that say I had at one point. I guess I should say I don't remember meeting Slash."

Stinson told Observer that he didn't miss the GN'R gig. "I miss the people a whole lot and obviously you miss the fans and stuff like that," he said. "But where I'm at in life right now, that's just a whole thing that… I'm not saying I'd never do it again but I'm kind of glad I moved on from that."