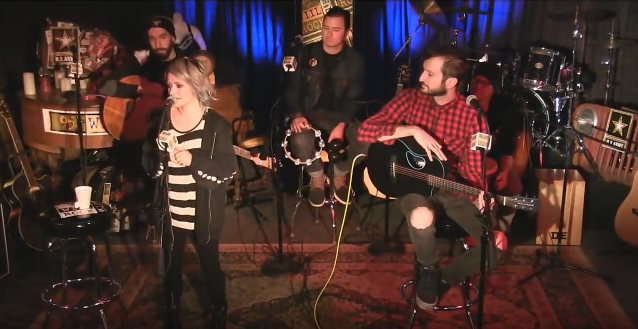 Former FLYLEAF singer Lacey Sturm recently took part in an interview and acoustic performance at the studios of the 95 WIIL Rock radio station in Kenosha, Wisconsin. You can now watch video footage of her appearance below.

When she's not onstage or in the studio, Sturm leads a busy post-FLYLEAF life as an author, motivational speaker and happily married mother of two.

Lacey has earned legions of fans worldwide not only through her astoundingly emotive voice and chart-topping songwriting, but also for the sheer sincerity of the uplifting messages pervading her work. Whether fronting FLYLEAF or now as a solo artist, she remains uncommonly true to herself while inspiring others to strive for better ways to live and love.

"In the beginning, FLYLEAF really centered around my story and vision," Lacey explained. "This new project continues that narrative in a cohesive way."

FLYLEAF recruited singer Kristen May as Sturm's replacement and released its fourth album, "Between The Stars", in September 2014. May has since left the group.