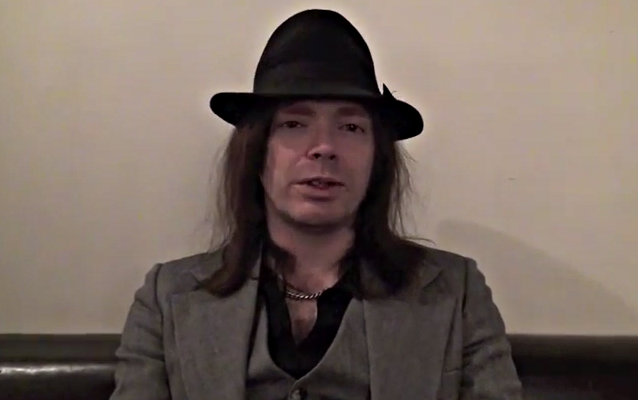 In an interview with BarbaraBorowski.com, Andersson stated about the new IMPERIAL STATE ELECTRIC CD title: "It's pretty simple: we have a reptile brain back here that takes care of the instincts and that's the whole part of rock and roll. It's not supposed to be overanalyzed. But it's like, a lot of other bands take themselves way too seriously. At the same time, I think, I mean, music is everything for me, but it's still an instinct, and if you hear a 4/4 beat, yeah it's instinct. It gets you going. But at the same time, we don't need to write stupid lyrics; we put a lot of effort in our lyrics. But what we are trying to say it's boring to be pretentious. Music and rock and roll is an art form, of course, it's a reality escape; you go to a show and forget the troubles you have, and I think there's nothing wrong with that. And also reptiles are kind of cool, for artwork. And it sounds good."

Regarding the songwriting process for "Reptile Brain Music", Andersson said: "Some songs on the new album are new and some songs are over five, six years old, because sometimes I look on the list of my demos, then I see a song and show it to the other guys and ask what they think about it. And they like it or not. I think there's two songs on the album which are from the HELLACOPTERS period, and when I showed it to these guys, they asked me, 'Why didn't you record this with the HELLACOPTERS?' Well, because we were five guys in the band, and maybe they didn't like it, or I don't know. If you try to sit down and think, like, 'So now I'm gonna write a BLACK SABBATH album,' I don't think it's gonna be good. You have to write whatever you feel. I write so many songs. For this album, I think we chose from about 30 songs, then we all four discussed it."