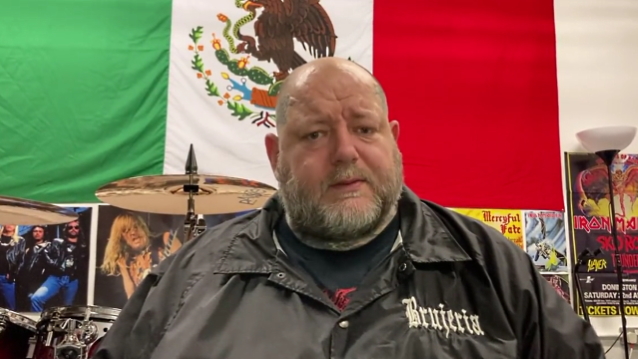 Legendary extreme metal drummer Nick Barker (LOCK UP, BRUJERIA, DIMMU BORGIR, CRADLE OF FILTH) was asked in a new interview with Ireland's Overdrive for his opinion on the current state of the "extreme music" scene. He responded: "I think it's become slightly oversaturated, especially death metal. There's an element where it's all beginning to sound the same. Thirty years ago, it was all about the 'riffs,' and now, thirty years later, it's all about how fast the BPM is on the track. It's not about the riffs anymore; it's about the typewriter.

"It's a real shame that death metal has gone that way," he continued. "I'm old-school in thinking the best death metal was 'Altars Of Madness' [MORBID ANGEL], 'Slowly We Rot' [OBITUARY]… POSSESSED, DEATH, et cetera. Those bands were all about the riffs rather than just what it had become now. There's very little artistic merit these days. It's almost become soulless. I mean… that's just death metal. It's a generational thing also. People don't want to pay for music anymore; they expect it for free. It's lost some of its credibility, and the artists that are creating this music are not getting the respect they deserve. Also, the attention span of people these days is a lot shorter. To be honest, I don't follow it anymore and am very much out of touch. [Laughs]

"The good bands will always withstand; the others will just be forgotten about," he concluded.

Earlier this year, Barker announced the launch of a new U.K. hardcore band called BORSTAL. The group, which also features Pierre Mendivil (KNUCKLEDUST), and members of DRIPBACK and KING OF PIGS, released its debut EP, titled "At Her Majesty's Pleasure", on April 1 via 4Family Records. The EP was recorded, mixed and mastered at Monolith Studios by Charlie "Squid Commander" Wilson in Tottenham (September 2020). The EP also features a cover version of THE LAST RESORT's "King Of The Jungle", featuring a guest appearance by British oi legend Arthur Kitchener, father of Lee Kitchener (BORSTAL guitarist).