"Romulus", the new video from EX DEO — the band led by KATAKLYSM frontman Maurizio Iacono — can be viewed below. The clip was shot in March in Belgrade, Serbia with renowned director Stanimir "Staca" Lukic (MOONSPELL, KAMELOT, DEATHSTARS, TYPE O NEGATIVE). Maurizio stated, "The setup was extremely pro. Stanimir and Ivan did such an amazing job and paid attention to every single detail. To recreate Rome and the story of Romulus and Remus was a big challenge, but I think we nailed it and the ideas behind it are incredible. Expect an epic feel, like the movie '300' for the texture... A big thank you to all the film crew and the actors!"

A demo version of the EX DEO track "Cry Havoc" is available for streaming on the group's MySpace page. 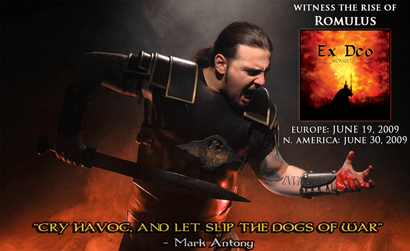