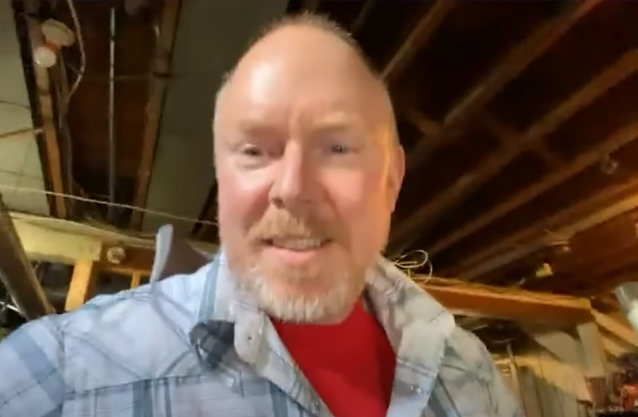 Christy, who has played with CHARRED WALLS OF THE DAMNED, ICED EARTH, DEATH and CONTROL DENIED, and who currently works for "The Howard Stern Show", took to his social media on Saturday (August 22) to upload a video of him playing along to the QUIET RIOT classic "Run For Cover". He wrote in an accompanying caption: "Here's a drum tribute video to the legend Frankie Banali. I would not be a drummer if it weren't for Frankie & the Metal Health album. This is the song that made me want to play double bass. Thank You Frankie. RIP @FrankieBanali @QUIETRIOT @EddieTrunk @rudysarzo"

The 46-year-old Christy began working on "The Howard Stern Show" in 2004 after winning the "Get John's Job" contest. He is known for his prank calls, song parodies, personality and stunts performed on the show. He is also a stand-up comic and an actor, appearing in and directing several independent films.

Here’s a drum tribute video to the legend Frankie Banali. I would not be a drummer if it weren’t for Frankie & the Metal Health album. This is the song that made me want to play double bass. Thank You Frankie. RIP @FrankieBanali @QUIETRIOT @EddieTrunk @rudysarzo pic.twitter.com/9cHjOdlaVo