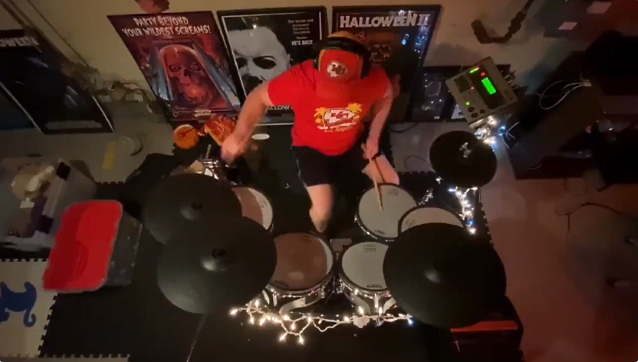 Actor, comedian and acclaimed heavy metal drummer Richard Christy has paid tribute to Neil Peart, who died on January 7 in Santa Monica, California after a three-year battle with glioblastoma, an aggressive form of brain cancer. The iconic RUSH drummer was 67 years old.

Christy, who has played with CHARRED WALLS OF THE DAMNED, ICED EARTH, DEATH and CONTROL DENIED, and who currently works for "The Howard Stern Show", took to his social media on Saturday (January 11) to upload a video of him playing along to the RUSH classic "Tom Sawyer". He wrote in an accompanying caption: Here’s a drum video tribute to the greatest drummer who ever lived and the greatest drum solo ever created RIP Neil Peart @rushtheband #TomSawyer"

When Peart's death was first made public on Friday (January 10), Christy tweeted: "Just heard of the passing of the greatest drummer who ever lived. An influence on millions. One of the best days of my life was getting to meet him in person and shake the hand that played Tom Sawyer. RIP Neil Peart @jonhein"

The 45-year-old Christy began working on "The Howard Stern Show" in 2004 after winning the "Get John's Job" contest. He is known for his prank calls, song parodies, personality and stunts performed on the show. He is also a stand-up comic and an actor, appearing in and directing several independent films.

Just heard of the passing of the greatest drummer who ever lived. An influence on millions. One of the best days of my life was getting to meet him in person and shake the hand that played Tom Sawyer. RIP Neil Peart @jonhein pic.twitter.com/cevER8JmqG