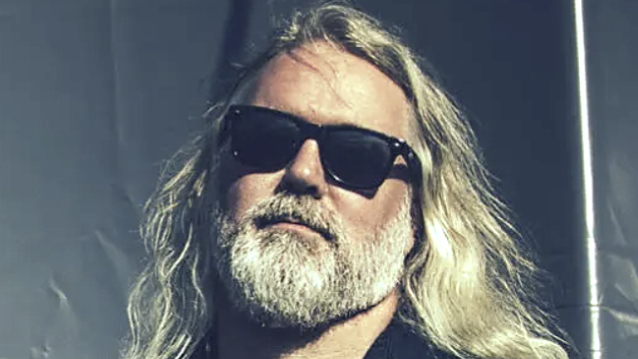 Former DARK TRANQUILLITY bassist Anders Iwers says that the decision to leave the band was both "easy" and "very hard."

Last month, it was announced that Iwers and drummer Anders Jivarp were exiting DARK TRANQUILLITY.

On Monday (September 20), Iwers took to his Facebook page to write: "Hello friends. I took some time off from social media after my decision to leave the band was made public. In light of recent social media activities I think I may need to address this matter a little.

"I was not fired from DT. I quit before the summer, but we decided to wait a bit until we posted it officially.

"My decision to leave DARK TRANQUILLITY after six years was not made in haste, or in affect.

These last 18 months or so during the pandemic was rather hard for me, on many levels, and it made me think and reflect really hard on my place in life, and who I really am. I came to the conclusion that who I am is not decided by how many people I get to play in front of. And it is not decided by what or with who I play.

"I will always play. Music is not a choice for me.

"I have known and loved the DT-guys for over 30 years and they are family to me. Yes, we had our differences, musically and personally. Doesn't matter, people are different. I consider them brothers in all but blood. This of course includes Anders Jivarp, who was still in the band when I left. Most of our crew I have known for over ten years. Also family who I would take a bullet for.

"To make it very easy to understand, I was done. In my soul, I did not have the urge anymore. Seeing the touring plans made me realize that I don't want to be away from my family for that long anymore. So when that became clear to me, the decision was easy. And very hard. But inside, I know I made the right call. Though I don't regret a single moment spent with DT.

"I will continue to support them. Always."

Jivarp and Iwers will be replaced on DARK TRANQUILLITY's upcoming tour by Joakim Strandberg Nilsson (IN MOURNING, WOLVES WITHIN) and Christian Jansson (GRAND CADAVER, PAGANDOM), respectively.

DARK TRANQUILLITY frontman Mikael Stanne shared the news of Jivarp and Iwers's departures in a statement on social media on August 13. He wrote: "Times have truly changed.

"This last year and a half has been challenging to say the least, and we've all had time to think over our decisions and motivations in all aspects of life. When removed from what you take for granted, it becomes clear that you realize what is truly important in life. And this is different for everybody.

"Anders Jivarp and Anders Iwers have decided to move on to other things and not be a part of the band anymore.

"These are two of the most amazing, loyal and dedicated friends and musicians you could ever find and as sad as we are seeing them go, we know that if passion leads you elsewhere you should follow it.

"Anders Jivarp has of course been there from the very beginning, being instrumental in creating the sound that eventually became our own. His songs are some of our most beloved and with the exception of one insane evening in Istanbul 20 years ago he has played every single show since the band's inception. We're excited to hear what will come out of Anders' future musical projects.

"Anders Iwers has been with us for the last six years but since we have known each other from the very early days of the band it felt like he had always been there. He played on our two latest records, not to mention being an integral part of our live shows.

"We love you guys so much and we wish you the absolute best in everything that you do."

Released in November 2020, "Moment" was recorded at Nacksving Studios and Rogue Music by Martin Brändström and then mixed/mastered by Jens Bogren at Fascination Street Studios.

Hello friends.
I took some time off from social media after my decision to leave the band was made public.
In light of...