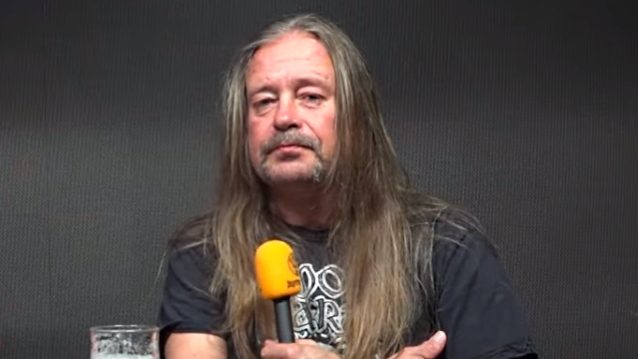 Ex-CHILDREN OF BODOM guitarist Roope Latvala says that his former bandmates "were already dead" to him by the time Alexi Laiho passed away last December.

Latvala was a member of CHILDREN OF BODOM for more than a decade before being fired in May 2015. His exit came just as the band was preparing to enter the studio to begin recording its ninth album, "I Worship Chaos".

Latvala discussed his departure from CHILDREN OF BODOM in a new interview with Finland's Chaoszine. He said (as transcribed by BLABBERMOUTH.NET): "I was betrayed and kicked out… [I] never spoke a goddamn word [to any of them after that]. And if I tried to, they totally shut me down [and told me], 'You can talk to our lawyer.' So that's about that. So those guys, to me, they were already dead."

Asked if he was sad that he wasn't able to repair his relationship with the CHILDREN OF BODOM frontman before the 41-year-old's passing, Roope said: "Yeah, there was some stuff to settle. I still wanna remember and I still have dreams about those times when he used to be the best buddy of mine."

Latvala also talked about how he came to be fired from CHILDREN OF BODOM just prior to the studio sessions for "I Worship Chaos".

"I was already pretty much ready to go and start recording," he said. "So I knew every fucking thing. Except they kind of shut me out before; they didn't let me in the fucking rehearsals. So what Alexi was talking that I was never there, and that's bullshit. They didn't me let me. Because I had a couple of days that I didn't — maybe I was sick [or had a] hangover or whatever."

Asked if he thinks part of the reason the other members of CHILDREN OF BODOM shut him out was because he was drinking heavily at that time and they wanted to provide a supportive environment for Alexi to help keep him on track, Roope said: "All drinkers, when they play sober, they start this fucking hypocrisy, like moral Jesus stuff. And then when those Americans came around [referring to CHILDREN OF BODOM's management] and started taking over, Alexi started to… Fucking dudes that didn't know anything about shit. [Prior to that] we had German management, which [had] been [there] since the start. So we had a very relationship. And our crew and everything, we were all working like clockwork. First he fired a couple of crew guys — his closest friends again. And then our long-term relationship with Continental Concerts — that's a German firm. They were really cool. So he had to fire them because he started fancying those Americans. Everything that's American [was] cool; everything else is bullshit."

Back in 2017, Latvala said that he was dimissed from CHILDREN OF BODOM on the very day he was scheduled to join his then-bandmates for the start of the "Chaos" recording sessions. His termination from BODOM came as such a shock that he didn't play his instrument for two years as he started drinking more heavily to cope with his feelings of dejection and discouragement. As a result of being fired, Roope fell into a major depression.

Latvala joined CHILDREN OF BODOM in the middle of the group's world tour in 2003 following the departure of Alexander Kuoppala and made his studio debut on the band's 2005 album "Are You Dead Yet?"

Laiho addressed Latvala's departure from CHILDREN OF BODOM during an August 2015 interview with Artisan News. He stated at the time: "We were at a phase where we wanted to, sort of, have a new beginning and reinvent ourselves, on a certain level. And everybody — all four of us — were pushing it harder and putting more effort on the band and just working extra, extra hard. And he wasn't quite there with us, you know, as far as the level of work ethics and, you know, stuff like that. So we felt like everyone's better off if we part ways at this point, and that's what happened. And, yeah, it [happened] three days before we hit the studio [to record 'I Worship Chaos'], but it was not… I mean, it was something that everybody was sort of anticipating already. And I had… To be honest, I had decided, a month or so before that, that I was gonna do all the guitars on the album. Because, like I said, it wasn't just working out with him."

CHILDREN OF BODOM in 2015 recruited Antti Wirman, the younger brother of the band's keyboardist Janne Wirman, to handle second-guitar duties for some of their shows. BODOM later named Daniel Freyberg (NAILDOWN, NORTHER) a permanent replacement for Latvala.

Alexi passed away on December 29, 2020 in his home in Helsinki, Finland. He died of alcohol-induced degeneration of the liver and pancreas connective tissue. Furthermore, Laiho had a cocktail of painkillers, opioids and insomnia medication in his system.

Alexi and drummer Jaska Raatikainen founded CHILDREN OF BODOM in 1993, and the band was one of the most internationally acclaimed metal acts in Finland up until their very last farewell concert in December of 2019. Last year, Alexi put together BODOM AFTER MIDNIGHT, which recorded three songs and shot one music video.