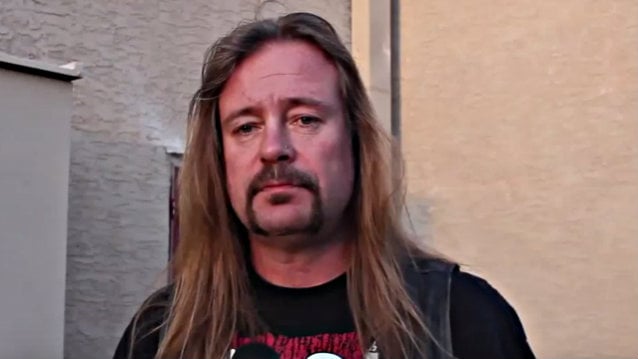 Ex-CHILDREN OF BODOM guitarist Roope Latvala says that he was "stabbed in the back" by his former bandmates.

Latvala was a member of CHILDREN OF BODOM for more than a decade before being fired in May 2015. His exit came just as the band was preparing to enter the studio to begin recording its latest album, "I Worship Chaos".

In his first interview since his split from CHILDREN OF BODOM, Latvala revealed that he was dimissed from the group on the very day he was scheduled to join his then-bandmates for the start of the "Chaos" recording sessions. His termination from BODOM came as such a shock that he didn't play his instrument for two years as he started drinking more heavily to cope with his feelings of dejection and discouragement.

"I really feel stabbed in the back by those guys," Roope told Finland's YLE. "I've been bitter at those guys. I was fired without an explanation."

Roope added that he felt that "CHILDREN OF BODOM's success had gone to" frontman Alexi Laiho's head and that Alexi started to "look down on" him for reasons that weren't quite clear to him.

As a result of being fired, Roope fell into a major depression and "started to focus on drinking."

"I couldn't touch my guitars," Roope said. "It was as if it was forbidden for me to play guitar."

According to the YLE report, Roope just recently dug out "a couple of Les Pauls" and stated composing a whole bunch of new tracks, which he is excited about.

Latvala joined CHILDREN OF BODOM in the middle of the group's world tour in 2003 following the departure of Alexander Kuoppala and made his studio debut on the band's 2005 album "Are You Dead Yet?"

Laiho addressed Latvala's departure from CHILDREN OF BODOM during an August 2015 interview with Artisan News, He stated at the time: "We were at a phase where we wanted to, sort of, have a new beginning and reinvent ourselves, on a certain level. And everybody — all four of us — were pushing it harder and putting more effort on the band and just working extra, extra hard. And he wasn't quite there with us, you know, as far as the level of work ethics and, you know, stuff like that. So we felt like everyone's better off if we part ways at this point, and that's what happened. And, yeah, it [happened] three days before we hit the studio [to record 'I Worship Chaos'], but it was not… I mean, it was something that everybody was sort of anticipating already. And I had… To be honest, I had decided, a month or so before that, that I was gonna do all the guitars on the album. Because, like I said, it wasn't just working out with him."

CHILDREN OF BODOM in 2015 recruited Antti Wirman, the younger brother of the band's keyboardist Janne Wirman, to handle second-guitar duties for some of their shows. BODOM has since named Daniel Freyberg (NAILDOWN, NORTHER) a permanent replacement for Latvala.

In a 2016 interview with Ultimate Guitar, Laiho spoke about Freyberg's addition to CHILDREN OF BODOM. He said: "I've actually known him for over ten years. He's played in a couple bands so I always knew he could play guitar. When we started looking for a new member, or at least somebody to do the shows with, we tried out a couple guys who didn't live in Finland and it didn't work out and this guy, he was right there and he just informally brought it up, like, 'Hey, if you guys need any help, let me know.' I hadn't heard him play in a while, so I had him send me a video with a couple of riffs to see if he could still play, and he rocks. He's a hard-working dude. He's a quick learner, and so far it's been awesome."