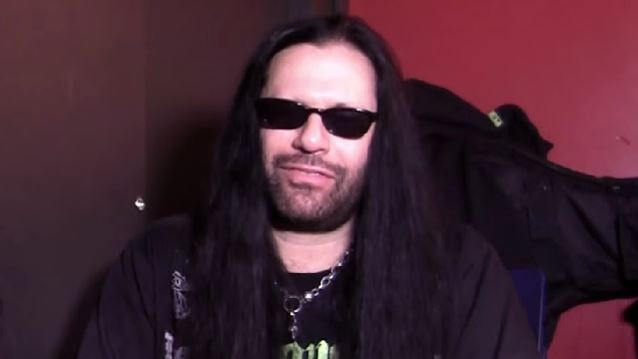 Canada's The Metal Voice conducted an interview with with ONSLAUGHT guitarist Nige Rockett and the band's touring vocalist Neil Turbin (formerly of ANTHRAX), along with ARTILLERY singer Michael Bastholm Dahl, when the two bands performed in Montreal, Quebec, Canada on November 9 during the "Thrash Invasion Tour 2014". You can now watch the chat below.

Asked for his take on illegal music downloading, Turbin — who was a member of ANTHRAX from August 1982 until August 1984 and sang on the band's debut album, "Fistful Of Metal" — said: "We just came from a really nice restaurant here in Montreal. So when we went to that restaurant, would it be cool if we just went there and said, 'Hey, can we get in free and can we get a free t-shirt? And can we also get a VIP and can we also have free food and can you give us some free drinks? And we're not gonna tip you and we're not gonna pay anything, because we should have it for free. 'Cause why should we pay for any downloading? Can we just have your album for free? Can we have everything for free? I mean, that's the mentality that's out there."

He continued: "You can't walk into a hotel and get a free room, just saying, 'Hey, I want it for free.' But people do expect to get free CDs. They figure they can just download it, they figure they can just… 'Can you get me into your concert for free?' Well, this is the way musicians, artists make money — they get paid by working, and their work is the music and the creation of music and also the artistry. So I think that it's an unfortunate circumstance."

Turbin added: "I won't brush it under the carpet or sugarcoat it by saying it's okay — no, it's not okay. But the people who ruined it are the architects of the Internet.

"There is no code lock on the download. In other words, they didn't invent it where there was some type of code in the download so you'd have to unlock it. Now there are some types of downloads that are out there that [require] a password. You've gotta unlock it; you can't just grab it. So, sure, there's a way to do that. If they didn't want you to have it for free, then they wouldn't have done it that way. So I think it's by design. There's a reason for it. There's usually a reason for everything, even if we don't understand what that is."

Turbin is fronting ONSLAUGHT on the "Thrash Invasion Tour 2014" of the U.S., Canada and South America. He is filling in for ONSLAUGHT vocalist Sy Keeler, who is sitting out the trek due to health issues with his son.