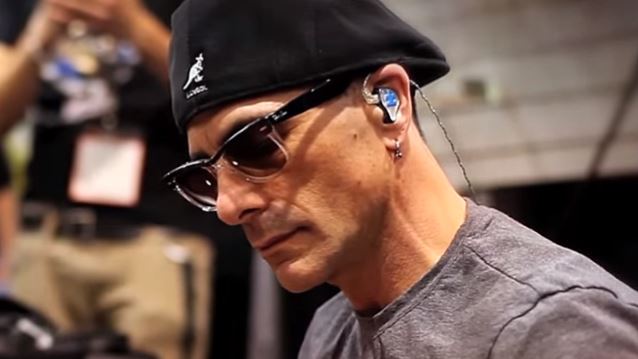 Ex-ANTHRAX guitarist Dan Spitz has branded his former bandmates "fairytale tellers" for claiming that drummer Charlie Benante and guitarist Scott Ian were responsible for writing "most of the music" and all the lyrics on the group's early efforts.

Spitz, who was the lead guitarist for ANTHRAX from 1983 to 1995, and again from 2005 through 2007, was commenting on a 2014 Metal Hammer article in which ANTHRAX guitarist Scott Ian is quoted as saying about the band's "Among The Living" album: "The way we worked on 'Among The Living', Charlie [Benante, drums] wrote most of the music and I did the lyrics. It was the process we'd used on the first two albums, so why change it?"

In a posting on his personal Facebook page, Spitz wrote: "Again... Fairytale tellers... Play my riffs, play my harmonies, tell us all the scales I used, play one lead on any ANTHRAX song from 'Fistful Of Metal' through 'Sound Of White Noise'!! Give it a shot. Then I will on a $100 guitar.... anywhere... anytime! We are all sick of this!!! And cracking up... Get help, please. We are all praying for y'all..."

He added in the comments section below his original post: "Put up or shut up. C'mon, Ian... Now it's your challenge... Play a G phrygian dominant scale, dorian, locrian #9th with a b5th, maybe I played mixolydian b13th with a b9th??? Is the harmony to the main guitar riff a 7th? What's a 7th? ... Aeolian minor with a diatonic mnemonic mixed with a phrygian?? What song did i mix those last three scales and on what album??? Put up or shut up!!"

Spitz continued: "I'm really, really sorry this has to be. I thought this was over, as I have to move onward and leave this dirty laundry behind. As stated previously, it's all just starting to bother our ANTHRAX family now, who know the truth.

"Three producers have now made written statements (and weren't asked to). The only guitar tech ever allowed into the recording studios of almost all ANTHRAX albums made a statement (I mean, he changed MY strings on MY guitars, both acoustic and electric for all albums during the recordings and writing) and so many more who were there at writing sessions now.

"I don't want credit. That goes to GOD... Period. For without HIM above, no riffs (like the beginning of 'Armed And Dangerous') would exist."

Spitz is a born-again Christian and Messianic Jew who has frequently cited his faith as an influential component to his life.

Spitz took part in the reunion of ANTHRAX's classic lineup in 2005 and 2006 but left the band after ANTHRAX's split with singer Joey Belladonna. 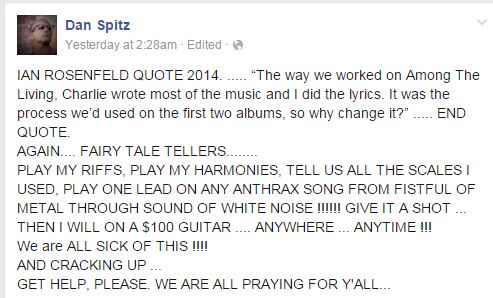