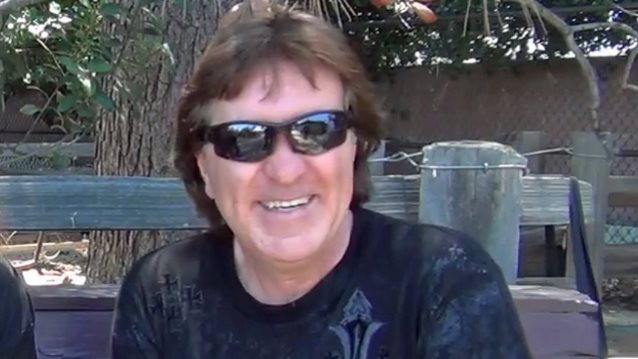 Former AC/DC drummer Simon Wright has weighed in on the strange situation regarding AC/DC and singer Brian Johnson. The legendary Australian rock band postponed the last ten dates of its recent North American tour after doctors told Johnson he faced "total hearing loss." AC/DC has since announced that it will use GUNS N' ROSES singer Axl Rose as a "guest vocalist" for all remaining shows this year, with Johnson apparently not returning to the band at all.

Asked how he feels about the fact that Brian appears to be out of AC/DC, Simon told Argentinean rock journalist Lucas H. Gordon at this past Sunday's (May 22) "Ride For Ronnie" motorcycle rally and concert in Encino, California (see video below): "It was a little weird and strange how the news came out. For a moment, it seemed like [Brian had] been fired, and that seemed, to me, to be the strangest thing ever, if he'd been fired, but it wasn't true. So he's had a problem with his hearing."

He continued: "I'm just shocked. But it's like Brian said, we all get older, we get injuries and stuff and everything. Like he said, I'm just glad for him that he's not really, really badly injured and that he's doing okay and I wish him the best of luck. And Axl seems to be doing… I saw a couple of [clips online and] Axl seems to be doing okay. It seemed really weird at first, but when you watch it, he's giving it his all and he seems to have a big respect for the band and the fans and everything. So it seems to be going along…"

Wright added: "I don't know what they'll do after this run of dates — I don't really know — but I wish 'em all the luck in the world."