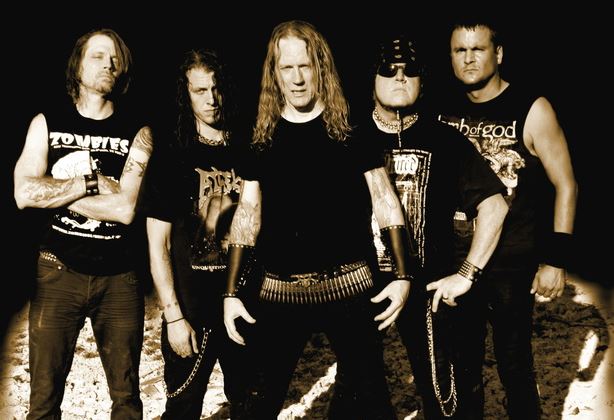 "Dead Can See", the new video from EVIL UNITED — the Austin/San Antonio, Texas-based band featuring Jason McMaster (WATCHTOWER, DANGEROUS TOYS, BROKEN TEETH) on vocals, a double guitar assault of T.C. Connally (PB/DC, CULT TO FOLLOW) and John Valenzuela (PB/DC, URIAL) as well as the brutal rhythm section of Don Van Stavern (RIOT, S.A. SLAYER) on bass and "Shakes" West (MURDERDOLLS, NEUROTICA, SEBASTIAN BACH) on drums — can be seen below. The song will appear on the band's sophomore full-length album, which is currently "in the mixdown phase." Connally says: "We can't wait for people to hear the new material."

McMaster previously stated about EVIL UNITED: "I think there are a lot of bands playing this type of metal right now, but I believe that EVIL UNITED has something different about it. There is a wide range of influence, lots of peaks and valleys to explore, without losing any of the extreme.

"It's a pleasure to work with Texas metal alumni such as these guys; they shred but they are paying attention to the thrash and power as well as the melody."