"Most of you are aware of that [vocalist] Apollo [Papathanasio, SPIRITUAL BEGGARS, ex-FIREWIND] hasn't been seen much with the band this year. He feels that he needs to slow down and take a time-out from his musical career for a while and focus more on his private life that has suffered from busy schedules. The band fully understands and respects this.

"This is nothing new and everyone saw this coming. Therefore, as you have already seen, EVIL MASQUERADE decided to move on several months ago. Now approaching a new album it's time to officially introduce the new singer.

"It hardly comes as a surprise for people attending EVIL MASQUERADE's shows this year that the microphone has been handed over to Swedish powerhouse singer Tobias Jansson [SAFFIRE, THE LAW]. In very short time, he has grown close to the whole EVIL MASQUERADE family and the band already sounds like a well-oiled machine live. You can look forward to hear him on the upcoming album, 'The Digital Crucifix'.

Video footage of EVIL MASQUERADE performing a cover version of the OZZY OSBOURNE classic "Mr. Crowley" — with Tobias Jansson on vocals — can be seen below.

EVIL MASQUERADE's fifth album, "Pentagram", was released in May 2012 via Dark Minstrel Music. The CD was once again produced by guitarist Henrik Flyman and mixed by Tommy Hansen (JORN, HELLOWEEN) at Jailhouse Studios in Denmark. 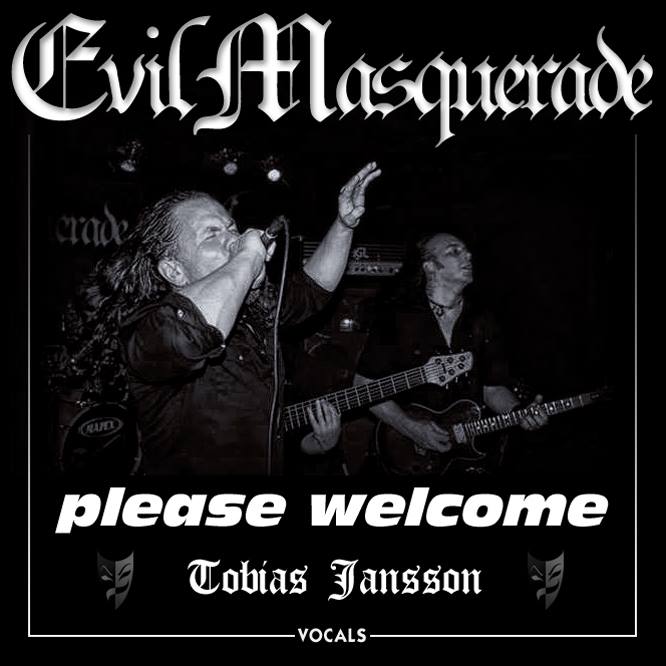