Due to "unforeseen logistical issues," the EVERGREY show scheduled for March 12 in Marietta, Georgia has been postponed until Friday, May 29. "Both the band and HoS Productions have explored all options in an attempt to salvage the situation," reads an official press release. "However, it was simply impossible given the constraints of the issues involved that normally are not an issue. We deeply apologize for the inconvenience and frustration regarding the show as everyone involved was looking forward to the special show that was planned. Tickets purchased for the original date will be honored at the later date or refundable via Ticket Alternative. HoS Productions and EVERGREY are asking those fans that had purchased flights for the show to contact Glenn at [email protected] as details are in place to offer something both unique and financially beneficial to offset the cost of your flights."

EVERYGREY will play the EyeScream Metal Fest at Circo Volador in Mexico City, Mexico on March 14. Also scheduled to appear are 3 INCHES OF BLOOD, SHINING and DARK LUNACY.

The uncensored video for the song "Broken Wings" from EVERGREY can be viewed below. The clip was directed by Patric Ullaeus of Sweden's Revolver Film Company who has previously worked with such acts as IN FLAMES, CHILDREN OF BODOM, ARCH ENEMY and LACUNA COIL.

"Torn", the new album from EVERGREY, entered the official chart in the band's home country at position No. 4. The CD was released in North America on September 23. The limited edition comes in a high-class digipack with one bonus track ("Caught In A Lie").

"Torn" was previously described by frontman Tom S. Englund as a "modern mix of 'In Search Of Truth' and 'Recreation Day'." "The tracks are all guitar-oriented and very atmospheric," he said. "They have exactly the sound that our fans expect from us." According to Englund, the slightly more experimental direction of EVERGREY's previous release, "Monday Morning Apocalypse", has given way again to old strengths and virtues. "Two years ago we needed an album with a slightly different approach and an expensive producer, just to find out how that sort of thing works," he explained. "It was the right album at the time, but now we have returned to our typical trademarks." This is one of the reasons why the tracks on "Torn" were self-produced by Englund together with drummer Jonas Ekdahl. In addition, the band has a new bassist, Fredrik Larsson having been replaced by former STRATOVARIUS musician Jari Kainulainen. 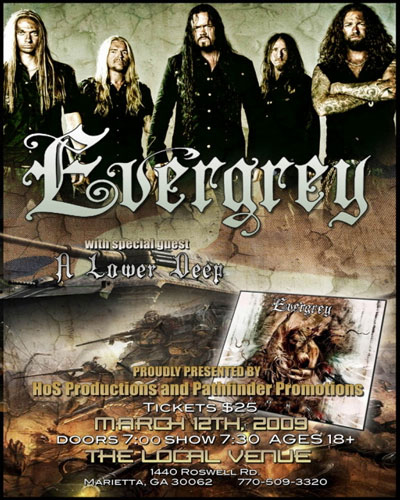