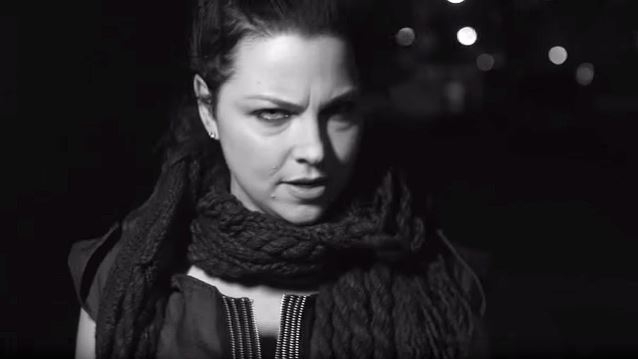 EVANESCENCE singer Amy Lee has released her cover version of the Chris Isaak track "Baby Did A Bad, Bad Thing" via her recently launched YouTube channel. Check it out below.

Says Lee about her decision to cover "Baby Did A Bad, Bad Thing": "This cover and I have history. We've been through a lot together!

"It all started back in '09. I'm always on the lookout for a chance to write for film, and the people making 'Cabin In The Woods' wanted a cover of this song for the scene where a girl is dared to make out with a taxidermy wolf head on the wall. Gotta love it! We were hanging out writing together anyway, so I decided to take a stab at it with my collaborator and friend Will Hunt (producer/owner of Spaceway Studios in Ft. Worth). They sent us the scene to write to and we had a blast making a short part of this version — we LOVED it! …They didn't! Ha. And so it goes. We went ahead and finished out the song in my studio just for us, and, after many late-night jams with friends, decided it was too cool to waste — it was going on the next album."

She continued: "That album was the first time I watched something I was working on totally blow up in my face. The suits had a change of heart during a frustrating recording process and I was told that none of the songs I'd been pouring my heart into for a year, in any form, were good enough — time to start over. I was devastated. I was furious. I was determined to take control of the situation and use it to push myself forward. It ended up making me angry enough to write EVANESCENCE's heaviest album — which I love — and we did end up using three songs from the original project, but I was still left feeling unsatisfied about what I lovingly refer to as my 'broken record.'"

Lee added: "I've believed, mostly alone, in this damaged little handful of unfinished recordings for five years, and for the first time I own them. I plan to finish some, re-do some, and probably keep a couple to myself. Since this one is a cover, I decided to mix it the way I wanted it and put it out alongside the covers I've been doing lately. It feels SO good to finally share it!"

Lee previously released her covers of LED ZEPPELIN's "Going To California", U2's "With or Without You" and PORTISHEAD's "It's A Fire".

EVANESCENCE re-emerged last month after a three-year hiatus with select, intimate shows in Nashville, Dallas and Los Angeles. The influential, Grammy-winning band had not performed live since November of 2012.