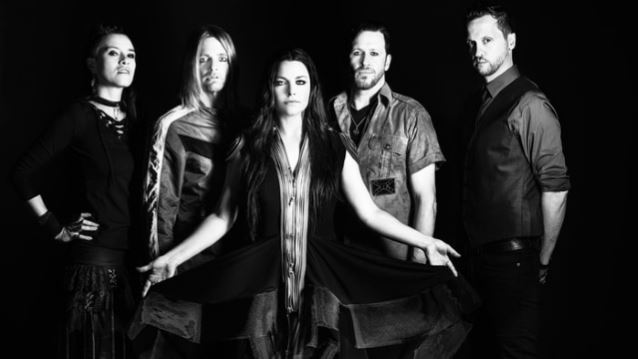 The last concert of EVANESCENCE's current U.S. tour, which is scheduled to take place this coming Wednesday, November 23 at The Paramount in Huntington, New York, will be streamed live on Facebook at Live Nation TV, Live Nation's YouTube page and on LiveNation.com.

EVANESCENCE recently debuted a previously unheard song called "Take Cover" during its North American tour. Singer Amy Lee told TeamRock about the electronic-tinged track: "We had a song in the bank and we were, like, 'You know what the fans would really love is a new song. That's all they ever ask for.' So we knocked the dust off an old song called 'Take Cover' that we had in the bank for a while and we loved it. It's one of our favorite moments every night on the tour. I think they like it a lot."

Lee has not said for sure if and when EVANESCENCE will record a new album, which would be its first since 2011.

She has hinted in recent interviews at some sort of non-traditional release, saying: "There is some new EVANESCENCE stuff that we're starting at, but it's not exactly the most traditional thing. It's not just, 'Okay, we're gonna make a new album right now'… First there's something else that's a little bit special and different and [that is] gonna take you down a different path that we wanna try."

EVANESCENCE is releasing a career-spanning vinyl box set this fall containing all three official studio albums along with the rare, early demo album "Origin". Also included in the six-LP set is a disc collecting the band's legendary bonus tracks along with the first new EVANESCENCE studio recording in years, "Even In Death (2016)", a song that originally appeared on "Origin".