EVANESCENCE has announced a new batch of spring headline tour dates. The trek serves as a follow up to the group's massive 2017 and 2018 "Synthesis Live" tours that featured a powerful live orchestra and received rave reviews nationwide. It also marks EVANESCENCE's return to its signature rock shows, revered by fans across the globe. The trek takes the quintet throughout the east coast and southern U.S., kicking off in Hollywood, Florida at Hard Rock Event Center on Sunday, May 5 and wrapping in Uncasville, Connecticut at the Mohegan Sun Arena on Sunday, May 19.

Tickets go on sale to the general public on Friday, February 8 at 10:00 a.m. local time. Limited VIP packages will also be available, which include meet-and-greets with the band, access to watch soundcheck, and exclusive merch items.

EVANESCENCE will also hit the festival circuit this summer, with performances at Welcome To Rockville (Jacksonville, Florida), Epicenter (Concord, North Carolina), and Impact (Bangor, Maine). The five-piece will also be the headlining act at Rock Fest in Cadott, Wisconsin on Thursday, July 18.

After touring European festivals and shows in 2016 and early 2017, EVANESCENCE unveiled its fourth album and most ambitious effort to date, "Synthesis". Released fall 2017 via BMG, the LP saw EVANESCENCE working with producer Will Hunt and orchestra arranger and composer David Campbell. "Synthesis" features two new EVANESCENCE songs in addition to fan favorites re-imagined with a live orchestra and electronica.

The accompanying "Synthesis Live" tour launched in 2017 was augmented by "Synthesis" producer and live electronicist Will Hunt, cellist and composer Dave Eggar, and conductor Susie Seiter. The band combined its intense performances and timeless songwriting with a gorgeous live orchestra, resulting in an ethereal concert experience. For the second leg of the tour in 2018, EVANESCENCE teamed up with Billboard Award-winning electronic violinist Lindsey Stirling for a successful co-headliner that was dubbed one of Live Nation's top 10 tours of the summer. EVANESCENCE also released its new concert film "Synthesis Live" in October 2018, capturing the group's incredible musicality. 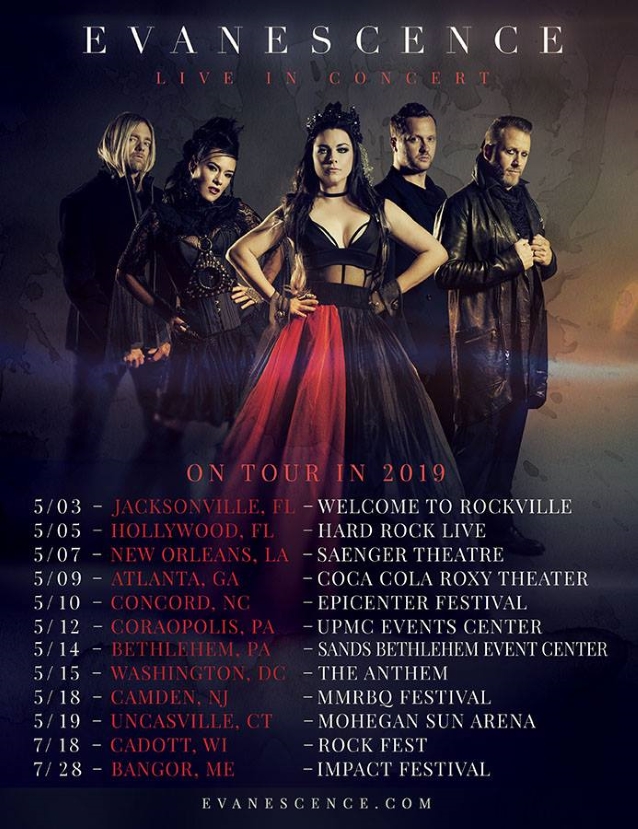