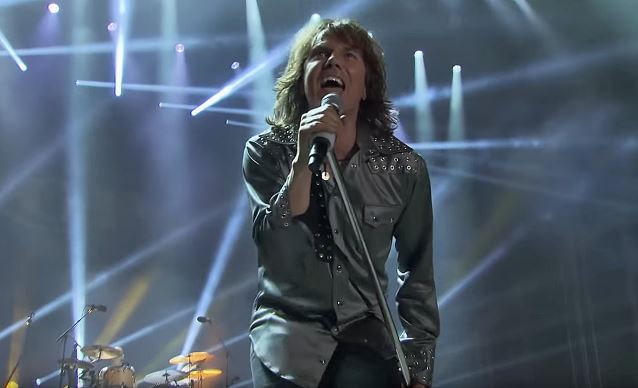 Metal Headz Media of Sleaze Roxx recently conducted an interview with vocalist Joey Tempest of Swedish hard rockers EUROPE. A couple of excerpts from the chat follow below.

Sleaze Roxx: With bands like MÖTLEY CRÜE, for example, calling it quits and going out publicly. What keeps a band like EUROPE going together and if you ever decided on a final tour would you announce it like that? How does that look for you?

Joey Tempest: Now, we've sort of been joking about that a little bit because there are so many bands that have said they've done the final tour for twenty years now. We've said we're never going to say we're doing the final tour. We're going to keep going as long as we feel like it's fun. I doubt if we're ever going to do something like that. But you never know! If we do it, it will be the final tour because we don't believe in saying something and then doing something else. I understand some bands — they think they're going to do their final tour and then they feel like, "Oh, no. We can't stop." And there's a lot of fans coming to see you and they change their minds. I mean that's okay too. I don't want to do it to trick people or anything like that. That's ridiculous.

Sleaze Roxx: Over the years, I've noticed that there's been a change in EUROPE's sound. What goes into the differences in sound that you've accommodated over the years?

Joey Tempest: It's like an organic natural progression in a way because we get tired of certain sounds and we move on. We dig deeper and find other ways of doing it. We don't want to repeat any records. So they're slightly different — all of our records. On the last record [2015's "War Of Kings"], for instance, we introduced the mellotron which is an old keyboard and we just vibed on a new version of it. It sounds really amazing. We used Hammond a bit more than normal keyboards. We use organic sounding keyboards, not synthesizers, which has been a natural progression for us. It sounds better, and it sounds better in our music on the radio. So that's it, a natural thing for us. We did pan keyboard and guitar more left and right on this record like they used to do more in the '60s and '70s so small changes like that make us evolve and make us do different things. [Producer] David Cobb was very instrumental too in finding a vibe for the record that you could listen back on in a couple years and you know that album has got the sound.

Sleaze Roxx: Did you ever think the song "The Final Countdown" would be a hit single when you finished it. Were you surprised by how big it got?

Joey Tempest: Yeah, we were surprised and I was too. I wrote it when I was still in college and that was only a small part of it — the riff, the main theme. When we did our third album which we called "The Final Countdown", we thought it was special though and we wanted to open the album with it. We wanted to open the show with it. We knew it was special as it stuck out. It was different. It was even different from what we did. Yeah, we knew it was special but we never had an idea that it would have a life of its own and there and still be played so much around the world. No, we didn't know that. But, of course, it's flattering and it brings people into the band and people get curious about more songs so that's cool.