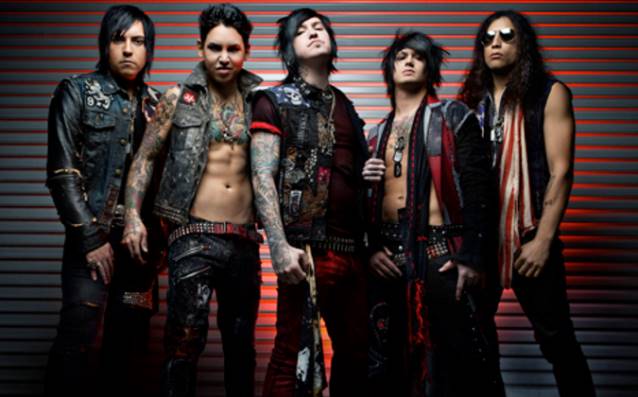 Las Vegas, Nevada-based rockers ESCAPE THE FATE have been forced to drop off the FIVE FINGER DEATH PUNCH-headlined "Wrong Side Of Heaven" tour (also featuring MISS MAY I and GEMINI SYNDROME) due to unforeseen family–related issues. The band deeply regrets that they will not be able to see their fans in Bossier City, Louisiana; Tulsa, Oklahoma; Kansas City, Missouri and Springfield, Missouri this time around but promises to revisit these cities as soon as their tour schedule will allow.

ESCAPE THE FATE's fourth album, "Ungrateful", was released in May via Eleven Seven Music. The CD was co-produced by John Feldman, Monte Money and Brandon Saller (ATREYU) and was mixed by Josh Wilbur.

A deluxe version of "Ungrateful" was also made available and included a DVD of the jam-packed free show the band held at The Roxy in Los Angeles on January 6, along with additional bonus content.

"Ungrateful" was described in a press release as "an example of the foot-to-the-throat intensity combined with soaring choruses and commanding songwriting that has set the band apart. ESCAPE THE FATE appeal to several layers of rock fans as a real band that blends classic qualities with edgy and new elements and have been categorized with the next generation of exciting rock bands."