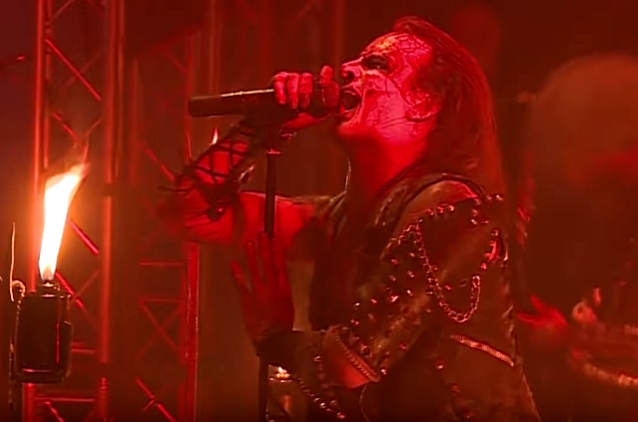 Prior to WATAIN's performance at the Rock Hard Festival in Gelsenkirchen, Germany on June 7, vocalist Erik Danielsson spoke with WDR's "Rockpalast". The full conversation can be viewed at this location. A few excerpts follow (as transcribed by BLABBERMOUTH.NET).

On the origins of his passion for music:

Erik: "I definitely have early memories of being drawn to music... I was obsessed, really, with not only the songs of the albums that my parents played, but also the record covers. I just remember staring at BEATLES albums for hours — like the 'Revolver' cover, which, funnily enough, was one of my first favorite record covers that I could stare at for hours, and it still looks like something that I would create myself today. It has this black-and-white, kind of DIY, fancy kind of look. I think it was that early, like [age] 4, 5 or 6 — BEATLES and THE [ROLLING] STONES, those two bands pretty much that my parents played a lot at home."

On whether he often drew during his youth:

Erik: "I really wanted to, I think, but I never really got around to [it]. I was a bit too restless. I couldn't sit down and focus on a thing for such a long time, but I remember being a bit envious of people who had that talent – other people in the classroom. I didn't start to develop my graphic design stuff and so on until we had formed WATAIN. I did a few things for the bands I played in before, but they were very [minor]. WATAIN was definitely the first time that I started to delve into the whole graphic side of things and see what could be done with it."

On his attraction to extreme metal:

Erik: "There were several moments that led up to that decision. My first concert was METALLICA in '93. They were everything to me. That was, like, my whole world. When I realized that there death metal and black metal, and especially that there was this community around it that was very underground and very secretive and you really had to know the right people and say the right key words in order to get access to this kind of stuff, this idea — combined with how the music sounded — for me was, like, the perfect setup. It was something more than just the music — it was a movement, with a lot of strong, radical ideas. Things that transcended the idea of just ordinary rock n' roll. There was a spiritual side to it, really, and the feeling of being a part of an underground movement — almost like a forbidden brotherhood. I'm still talking about when I'm 13 years old. These kind of things attracted me, and becoming a part of it and contributing to it and getting to know it up close, that happened over the course of a few years, but it changed my entire life. That's the reason I'm standing here."

On using blood during the band's live performances:

Erik: "We use a few different ingredients when we perform live, and have been doing so for quite many years now. There is a difference between how we perceive it and the reasons why we personally choose to do this and the fact that there is an audience that perceive it and get their own experience out of it. When it comes to our own personal reason, that's a private thing, and I can just say that all of these ingredients are chosen for a reason. They are very important elements in the show, but talking about what they create — the kind of setting they create — that, I think, is the more relevant part in this context... I like to think about the fact that, 'How often is it that a person is confronted with a sea of flames and barbarian people covered in blood just a few meters away from them in a sweaty crowd with loud, booming drums and hypnotic, ceremonial music. The totality of that is interesting, I think, and I prefer people to focus on the totality rather than the exact reasons. The exact reasons, they do exist, but that's more for our own private concern."

On whether he worries about getting the necessary approval to use blood during the band's concerts:

Erik: "Our whole lives are like that. Everything that we do. If we choose to do something that is outside of the box and 'against the rules' — something that is forbidden, or something that is good for you but maybe not good for everyone else — then you have to... leave room for disaster. There cannot always be a safety net for everything. WATAIN encourages chaotic circumstances and unpredictable scenarios. It's no safe-zone."