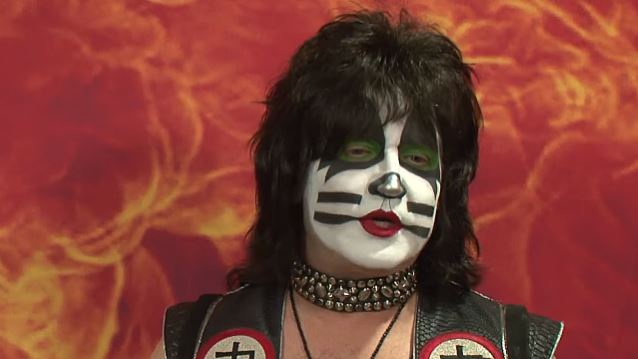 In a recent interview with Music Radar, KISS drummer Eric Singer spoke about the recording process for the band's last two studio albums, 2009's "Sonic Boom" and 2012's "Monster". He said: "The way we did the last two records, the band played live in the studio. We didn't play with a click track. One song on the newest record I played with a click track only because it was a song we literally wrote on the spot.

"If you're playing and everybody is making mistakes, you're not going to get the track. I thought, 'Let's play to a click. Let's at least get the drums.' I did it mainly for expediting the process, but other than that, every other thing was played live as a band. You get it warts and all but that's the thing — it's live.

"At this point, I'm pretty experienced from working in recording. All the other songs we did, we would go into a rehearsal room, jam the ideas out, get a basic arrangement so that everybody was familiar with the ideas and the riffs and had a chance to live with it, so when we got to the studio we would do two, three, or four songs at a time and we had that rehearsal tape as a point of reference for the tempo and the arrangement.

"The new record, on some of the songs you can hear me clicking the sticks or counting things off, you hear some of those noises in the background. I like that; to me that gives it that raw, really live element, which is important. That's why we did it this way, because we wanted it to be less slick and less produced in the sense of it being so perfect."

KISS frontman Paul Stanley recently told the Cleveland Scene that hasn't ruled out making a follow-up to "Monster". He said: "Records at this point are really something that if we do, we do it for us more than anybody else. The market, the sales aren't there… the delivery system isn't there. There really is no music industry. It's a guy who ran Tropicana last year that may run a record company this year. It's not a bunch of people who love music. It's a commodity at this point. So if we do an album, it's because we feel there's a reason. 'Sonic Boom', there was definitely a reason to do. 'Monster', there was a reason to do."

He continued: "We're toying, certainly I'm toying, with the idea of doing another album. I think it will happen. The only thing I'm adamant about is that it's not 'Son Of Sonic Boom' or 'Son Of Monster' or son of any other album. I'm not interested in making a concept album, but I'm also not interested in just rehashing the last two albums, so it has to be something fresh. Because initially, the people we're doing it for are us."

"Monster" sold 56,000 copies in the United States in its first week of release to land at position No. 3 on The Billboard 200 chart.