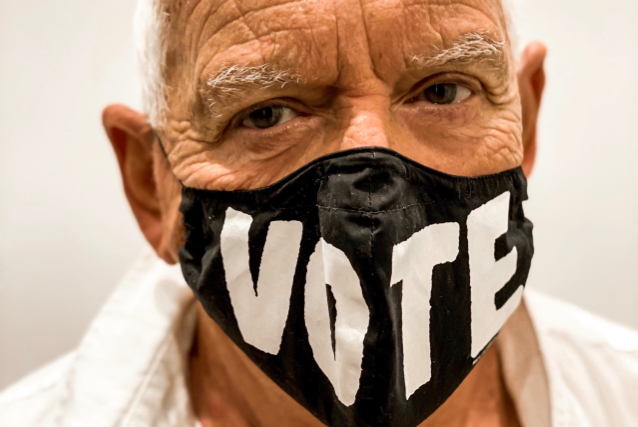 Eric Burdon, the English singer and songwriter and former frontman for THE ANIMALS, says that he "wasn't surprised" to learn that the song "House Of The Rising Sun" was played at a Donald Trump event earlier this week, explaining that "a tale of sin and misery set in a brothel suits him so perfectly."

The folk standard, which became a No. 1 hit in the U.K. for THE ANIMALS when they covered it back in 1964, was blasted over a speaker system on Wednesday (September 2) afternoon at Wilmington International Airport in Wilmington, North Carolina as Air Force One taxied down the runway while being trailed by two black SUVs. The aircraft was making its way to a crowd of hundreds that had gathered to catch a glimpse of President Donald Trump.

Earlier today (Saturday, September 5), Burdon shared a photo of him wearing a mask emblazoned with the word "Vote" in bold white lettering, and he included the following caption: "Even though nobody asked my permission, I wasn't surprised to learn that #Trump #864511320 used #HouseoftheRisingSun for his rally the other day...A tale of sin and misery set in a brothel suits him so perfectly! Far more appropriate for this time in our history might be"

In June, THE ROLLING STONES threatened legal action against Trump if he continues to use the band's music at his campaign rallies.

Three years ago, TWISTED SISTER frontman Dee Snider, who got to know Trump personally after appearing more than once on "The Celebrity Apprentice", said that he could no longer be friends with the president because he did not share his views on important issues, including the Trump administration's harsh immigration policy.


Even though nobody asked my permission, I wasn’t surprised to learn that #Trump #864511320 used #HouseoftheRisingSun for his rally the other day...A tale of sin and misery set in a brothel suits him so perfectly! Far more appropriate for this time in our history might be #WeGottaGetOutofThisPlace. This is my answer #vote #saveourdemocracy #bidenharris2020