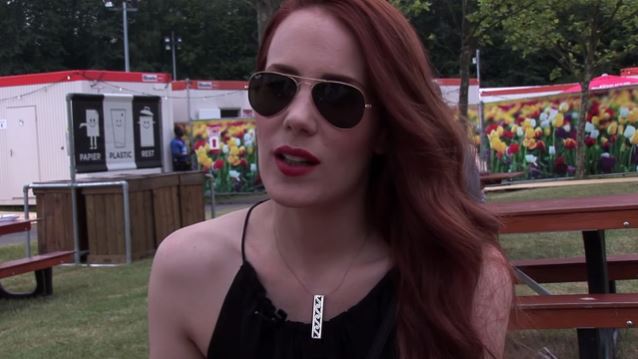 FaceCulture conducted an interview with singer Simone Simons of Dutch symphonic metallers EPICA at last summer's Pinkpop festival in Landgraaf, The Netherlands. You can now watch the chat in two parts below. A couple of excerpts follow (transcribed by BLABBERMOUTH.NET).

On how being a mother (father is KAMELOT keyboardist Oliver Palotai) has changed her life:

Simone: "Being here now is really amazing, because I have, [from my point of view], I have everything. I have a family, friends, and I've got a career. I get to do what I love, be a mom and be in a band. But it's extremely chaotic and a huge challenge, actually. Especially after the first year, when they're so very small and very depending on you — especially the mother also; it's difficult. But we planned our tours in a way that I would be away for longer periods after he turned one. Festivals are okay.

"It's cool. I'm not the only one who's got kids in the band; Coen, our keyboard played, has got two kids. So, yeah, we're still gonna tour a lot, but we're gonna keep the tours nice and compact and have time in between. So we have family and career all in one."

On whether having a baby influenced the lyrics on EPICA's sixth studio album, "The Quantum Enigma", which came out in May 2014:

Simone: "Yeah, it did a little bit. This record is, anyway, on a way more spiritual level. I would say spiritual, scientific [and] philosophic. That's the key points of the record. I was pregnant when we were writing the record, when I was writing the lyrics, the vocal lines. You go through a life-changing moment, and, of course, with each record, it feels a little bit like a birth as well. And for me, it was like three births, I always say: the birth of a mother, the birth of a son, and the birth of another CD. And it also plays simultaneously. Therefore, this record is also very special for me, 'cause it was a life-challenging record."

"The song [lyrics] which [were probably most influenced by my motherhood] would be 'Canvas Of Life'. It's about the circle of life: being pregnant and having to lose a family member at the same time is very bittersweet, in a way. So 'Canvas Of Life' is dealing [with] that."