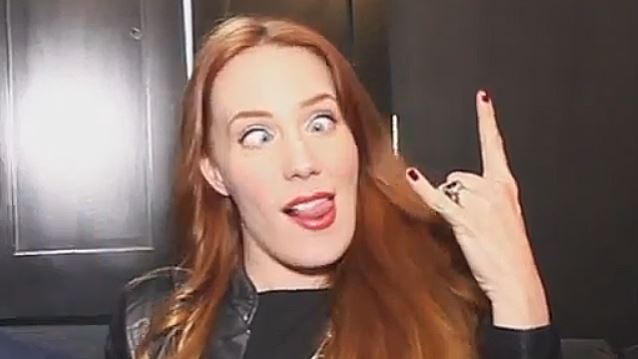 Jo Schüftan of Horns Up Rocks! recently conducted an interview with vocalist Simone Simons and guitarist Isaac Delahaye of Dutch symphonic metallers EPICA. You can now watch the chat below.

Asked how being a mother (father is KAMELOT keyboardist Oliver Palotai) has changed her life and her position in EPICA, Simone said: "It was actually refreshing to not tour for a while. We still played [live] until I was seven months pregnant. I had a huge belly, and I became bigger after that. I was, like, a belly and a little girl attached. And it was physically becoming a little bit uncomfortable to be on stage. My manager, he had to help me get into my stage shoes, 'cause I was, like, 'I can't do it.' Singing worked okay until much later. The baby is so high, you don't have the support of your musces, 'cause they move to the side when you're pregnant. So that was kind of funny. And when we did the demo recordings at my house together with Sascha [Paeth], Joost [van den Broek] and Mark [Jansen, guitar], I was sitting there with a huge belly, and my legs up, 'cause it was high summer. So that was all not very sexy and not very metal. But it was nice to kind of work on the new project. And [making a new] CD is also a little bit like [giving birth to] a baby. But, of course, you don't have to change its diapers, nor breastfeed the CD. But definitely [there are] two great new things in my life. And the baby being, of course, the real lifechanger. But I think that [EPICA's latest album] 'The Quantum Enigma' is going to be also a good change for EPICA."

Regarding whether she is planning on bringing her son on tour, Simone said: "No. He's not with me [on the road]. I want to keep him away from travelling and the stress. Maybe when he's a little older, he can come and visit. Single shows, but tours, I don't think. We've got family and friends [who can step in and help out when needed]."

EPICA's sixth studio album, "The Quantum Enigma", sold around 3,700 copies in the United States in its first week of release to debut at position No. 110 on The Billboard 200 chart.