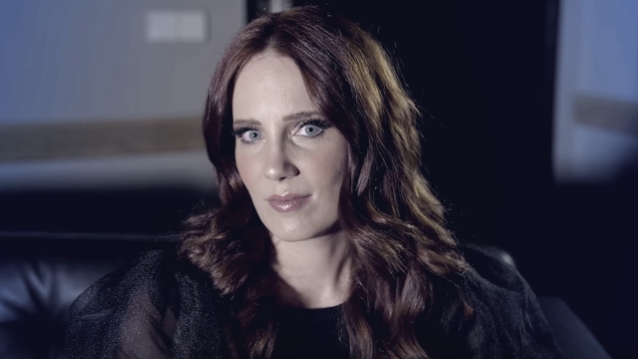 EPICA singer Simone Simons spoke to France's Loud TV about how being a touring musician has shaped her worldview.

"As you become older, you start to realize what is important in life," she said (hear audio below). "Everybody reaches that point in their life where they're trying to find the meaning of life, or the meaning of their life, or the goal they have in their life and what to do with your life while we have this very short time on planet Earth. And I'm happy that I get to be a singer and travel the world and really get the best out of life, in a way.

"If I wouldn't have joined EPICA, I don't know what I would have done with my life or where it would have taken me," she continued. "But I believe in fate, and I don't believe in coincidences. I believe that everything happens for a reason, and that makes me very calm inside storms as well. I always believe that, even if the situation is bad, it happens for a reason and that it's a life lesson that you need to learn.

"I love being a musician, I love being a mother, and I guess I am very lucky to have all those things," Simone added. "But it's not always easy trying to combine those things — that's more the struggle that I have. The work-life balance got out of hand. We were touring so much that it was becoming more like a burden than a pleasure. Because I love being in a band, but when the balance is not there, you start to miss your family and friends too much, [and] then it's not good. So we work on that — we try to make it so that it's workable for everybody. And there will always be times when it's gonna be more tough, but if the balance is out of control for a longer time, then it's not good. But that's why we also had our sabbatical, and that was a really good decision, to do that. And the end result is 'Omega', an album [that] we all worked on really hard and we came to a great result. Thanks to a little break from touring and recharging our batteries."

EPICA will release its new album, "Omega", on February 26 via Nuclear Blast. The follow-up to 2016's "The Holographic Principle" was once again produced by Joost Van Den Broek (POWERWOLF, AYREON) in part at Sandlane Recording Facilities in Rijen, Netherlands.