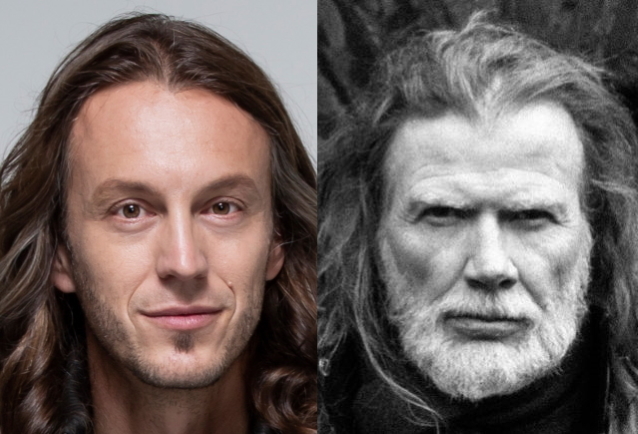 In a new interview with Australia's "Scars And Guitars" podcast, EPICA guitarist/vocalist Mark Jansen related a few humorous stories about his brushes with one of his favorite bands from his youth, MEGADETH.

"Dave Mustaine, being the leader [of MEGADETH], [is] maybe sometimes also quite a difficult guy to deal with; he seems a bit grumpy sometimes," Mark said (hear audio below).

"[EPICA] played at a couple of festivals with MEGADETH, and I have a couple of funny anecdotes. One of them is that MEGADETH was done playing, and they came back to their dressing rooms. And one by one [they] were climbing the stairs, and I was going downstairs, so I said 'hi' to all the guys, and everybody said 'hi' back to me. And the last in line was Dave Mustaine, so I said also 'hi.' Nothing [laughs] — no reaction whatsoever.

"Also one time with MAYAN [Mark's side project], we were playing in Mexico, and we were on the airport, and MEGADETH was going to play the same festival," he continued. "And we saw also the MEGADETH guys — they were all hanging around with everybody. And I thought, 'Where's Dave Mustaine? Maybe he has a different flight.' But then, after 10 minutes, I saw him. He was sitting with his hoodie, with a very grumpy face — like, 'Don't even dare to get closer to me. I don't wanna talk to anybody.' [Laughs]"

Mark went on to say that he doesn't "judge" Mustaine for not wanting to interact with other people. "If he doesn't want to talk to anybody, he should not do it," he reasoned. "But, to me, it gives me the impression that he's not the most easy guy to deal with."

Jansen's third and final anecdote — which he said was "the most funny one" — involved an incident that took place when EPICA and MEGADETH both played the Graspop Metal Meeting festival in Belgium. "That was a great festival with a great catering," he said. "But everybody needs this kind of food ticket to get your meal. But [Mustaine] was there, and he didn't have his meal ticket. So [the girl handling the food asked him,] 'Sir, do you have your meal ticket?' [And he said,] 'No, no. I don't have it.' [And she said,] 'But you need to have one to get your meal.' Then he was looking around over his shoulder [so] anybody could hear him, and then he said to the girl, 'I'm Dave Mustaine, the face of MEGADETH.' [Laughs] And then she replied, 'But you still need your food ticket, sir.' [Laughs]"

Offering a possible explanation for Mustaine's reaction, Mark said: "It's an ego thing, I think. When you get your food refused because you need to have a ticket, just like anybody else, and your ego is a little bit big, so to say, then you get in this defensive mood, like, 'Give me my food.' Everybody needs a ticket. Just go to get your ticket and come back. [There is no] big deal about that."

Jansen clarified that he wasn't speaking negatively about Mustaine in an attempt to denigrate MEGADETH.

"I'm a big MEGADETH fan, I must say," he explained. "My first metal album I bought was 'Rust In Peace' from MEGADETH. I'm a huge fan myself. But this guy… [Laughs]"

EPICA will release its new album, "Omega", on February 26 via Nuclear Blast. The follow-up to 2016's "The Holographic Principle" was once again produced by Joost Van Den Broek (POWERWOLF, AYREON) in part at Sandlane Recording Facilities in Rijen, Netherlands.