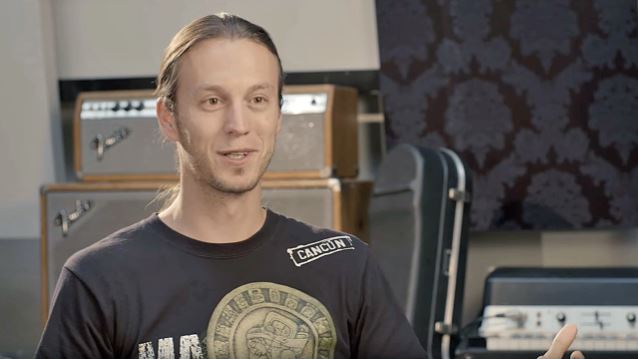 Aniruddh "Andrew" Bansal of Metal Assault recently conducted an interview with guitarist/vocalist Mark Jansen of Dutch symphonic metallers EPICA. A couple of excerpts from the chat follow below.

Metal Assault: Tell me about [the] new [EPICA album], "The Holographic Principle". What's it been like working on this album through the last year or two?

Mark: "Yeah, it was more even advanced than before, because we were thinking what can we do better, and it went all into details, for example recording everything live this time, whereas in the past we used samples for brass, for example. We had already recorded choirs and strings live, but for this one, we wanted everything live. Brass, woodwinds, oriental instruments, percussion, everything we did was played by human beings this time, so it was much more work to write and record scores, but also the songs themselves, we were working on them until we were really convinced that we couldn't make them any better. We started working more as a band to write songs for 'The Quantam Enigma', but with 'The Holographic Principle', it was even more of that. So, everybody was exhausted when we recorded it, but we finished recording sometime in June of this year, and now a real desire and hunger to perform it live comes back."

Metal Assault: When it comes to recording albums these days, I guess it's hard to put money into that process because you're not expecting too much in return, and more of the money is coming from concert ticket sales. So, it's good to see that you care about your work enough to still do take your recordings to the next level, and I think fans appreciate that.

Mark: "Yeah, but we're also in the lucky circumstance that Nuclear Blast is willing to invest in us. When we got a new deal, this was also one of the things we discussed, that we really want to keep growing as a band, production-wise. They totally agreed and gave us these possibilites, and that's very important. I agree with you, nowadays bands have to record with less and less budget, but fortunately we got the right budget to fulfill all our wishes and record this album exactly the way we wanted."

Metal Assault: You've been consistently releasing albums, so it's like you have a system in place. You do a tour and then you go into an album. You have to follow a schedule. But how are you able to find the creativity to come up with new music at a specific time? Does that work well for you?

Mark: "For me, personally, that doesn't really work. I always write music whenever I feel inspired, but some of the other guys in the band, they need such a schedule and they need pressure, and then they come up with the best results. So, everybody is different. I take whatever opportunity I have to write, for example, if I have an idea right now, I record it right away, because for me, inspiration is not something I can put on and off. It's there or it isn't. So, everybody finds their own way of working, but I have to say we are also really lucky to have five songwriters in the band. Whenever somebody is in a period not so much inspired, there are still four other guys who can write songs. I think that's one of the reasons why it's possible for us to release albums pretty much every two years, even though I must say the process for 'The Holographic Principle' was so advanced, after this touring cycle we might take a little break to recharge the batteries."

Metal Assault: Talking of the album itself, is "The Holographic Principle" just an overlying title, or is there a concept or theme behind the actual story or the music?

Mark: "Most songs are dealing with this subject, which says the whole universe as we know it might be a hologram. I got really fascinated by this concept and theory. I started reading about it and watching documentaries. In the beginning it really sounds like science fiction, something that simply cannot be true, and your mind cannot accept such a theory, but the more you read about it, the more you start believing it might be possible, and you can go wild on it. Lyric-wise, we felt a lot of inspiration regarding this subject and we used it as much as we could."