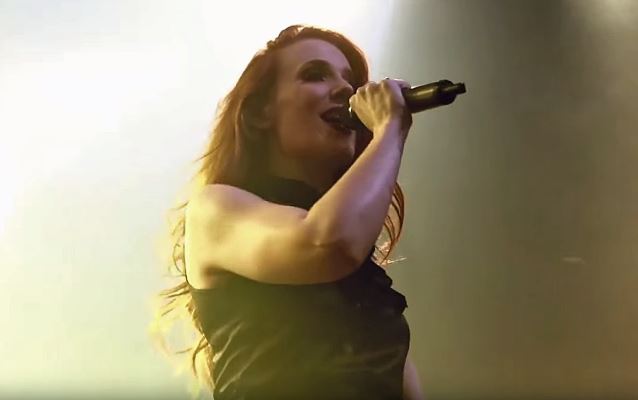 The official performance video for the song "The Essence Of Silence" from Dutch symphonic metallers EPICA can be seen below. The clip, which was filmed earlier this year at the band's sold-out show at the Ancienne Belgique in Brussels, Belgium, was shot and edited by Jens De Vos and his team at Panda Productions. The show was recorded by Ace Zec and mixed by EPICA producer Joost van der Broek.

This fall, EPICA and Swiss folk metallers ELUVEITIE will join forces to co-headline across North America. This trek, sponsored by Revolver magazine, also has Canada's THE AGONIST supporting on all dates.

EPICA frontwoman Simone Simons says the following about the upcoming tour: "We are ecstatic to finally return to North America. It is time to nurture our long-distance relationship with our fans over in North America. We'll have a wonderful time together and will perform songs spanning our entire discography. You guys better be ready for us."

This will mark EPICA's long-awaited return to North America after the band's tour with MACHINE HEAD in late 2014 got canceled. It will also be the group's first North American run in support of their latest album, "The Quantum Enigma", which hit the charts all over Europe and beyond.

"The Essence Of Silence" is taken from EPICA's sixth studio album, "The Quantum Enigma", which sold around 3,700 copies in the United States in its first week of release to debut at position No. 110 on The Billboard 200 chart.

In an interview with Aux Portes Du Metal, EPICA guitarist mark Jansen stated about the lyrical themes covered on "The Quantum Enigma": "'The Quantum Enigma' means that in quantum physics we can't observe little particles without influencing them. It's been proven in a very famous experiment called the dual slit experiment. As we are all made out of an infinite amount of particles, what does all of this mean for the world as we know it? Is the world still there when we're not watching? Or is it a holographic projection coming from ourselves in a way? What is real and what is an illusion? The 'solid' matter as we know it isn't that solid after all. It's all energy which is spinning and turning in a way that it gives us the illusion of being solid.

"'The Quantum Enigma' is pointing out such questions which are dealing about, thoughts, dreams, illusions of the mind. 'The Second Stone' talks about Alzheimer; people who get this disease die mentally for a first time, then after a while they die physically for a second time. 'Victims Of Contingency' talks about taking responsibilities for your deeds, and the power to learn from mistakes in order to grow as a human being. 'Chemical Insomnia' talks about the sleeping pill culture that goes totally out of proportions these days."