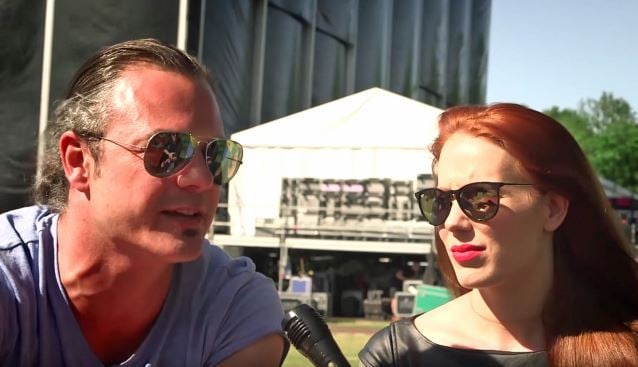 Toazted conducted an interview with singer Simone Simons and guitarist Isaac Delahaye of Dutch symphonic metallers EPICA before the band's June 6 concert at the FortaRock festival at Goffertpark in Nijmegen, Netherlands. You can now watch the chat below.

Speaking about the progress of the songwriting sessions for EPICA's follow-up to 2014's "The Quantum Enigma" album, Isaac said: "I have three songs, like, three set-up songs, and I have lots of stuff on the shelf. So I just need to find the time in between organizing festivals and doing [other things]. But once I can sit down in my studio with my coffee, then stuff is coming out automatically. So everyone is writing now. And then we're gonna sit together, put it in a big pile, and then sit together with the producer and think of which songs will make it."

Simone and Isaac also talked about the songwriting process for "The Quantum Enigma" and how it was a departure from the way EPICA had approached making albums in the past. Isaac said: "This time we did it a little different [from how] we used to. Because Simone lives in Germany, I live in Belgium, the others are in Holland spread out throughout the country. Usually, we would write it in our home studios and send files through the Internet, but this time, because, actually, Simone was pregnant back then, we turned it into a positive thing. And, actually, what is very normal for most bands, we rehearsed together. And so we wrote the songs individually, then we sat together with, first, let's say, the metal band — drums, bass and guitar — and then made sure that every… yeah, that the song was solid already on itself, without all the orchestration and all that. And then we went on, putting all the details on top of it, vocal lines. At her place, they worked on vocal lines in the meantime. So it was a very dynamic process, which took a lot of time, but it was totally worth it. And so we switched things around a little, and it paid off in the end. It was very… you know, you don't know what to expect, because it was new — a new approach — but, actually, it was very refreshing for us as a band, and the result sounds refreshing too, I think."

Simone added: "We are a democratic band, so everybody's got an equal important opinion, but we have a producer, which we, basically, put in charge to keep an overview of everything. And all the bandmembers, excluding me, wrote songs. And then, of course, in the end, you have to pick a couple of the songs — you cannot put all the songs on the record — and then it's very difficult to stay objective, so we have a producer helping us with that, and we put great trust in him. His name is Joost Van Den Broek. [This was] the first time we worked with him, and we recorded in a different studio. But I must say everything felt so right. We were so ready for this change, like Isaac said, and being like a normal band. Because we live so far apart from each other, it was touring and then quickly writing CDs, recording and touring, and everything mixed up. And now we took a break from touring to really dig into the material and not finish until it's completely done and that we're all satisfied. And we are all very much satisfied."

"The Quantum Enigma" sold around 3,700 copies in the United States in its first week of release to debut at position No. 110 on The Billboard 200 chart.