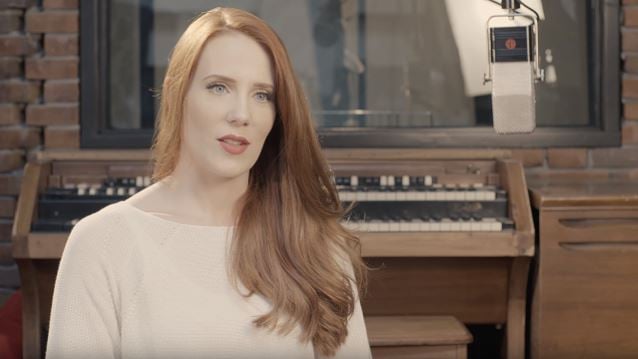 Dutch symphonic metallers EPICA will release their seventh studio album, "The Holographic Principle" on September 30 via Nuclear Blast. The CD was produced by Joost van der Broek at Sandlane Recording Facilities and was mixed by Jacob Hansen (VOLBEAT, DESTRUCTION). The cover artwork was created by Stefan Heilemann.

The second part of a studio documentary on the making of "The Holographic Principle" can be seen below.

"Halfway through 2015, EPICA started a new journey: writing and recording the seventh studio album, 'The Holographic Principle'," explains EPICA guitarist Isaac Delahaye. "In between touring, we spent our time in the Sandlane Recording Facilities with producer Joost van den Broek and here's the first part of our studio documentary! It gives you a little insight into the creation of what we see as our most complete album ever. You'll hear rough snippets of new music, and you'll see how we built things up. Enjoy!"

EPICA previously stated about the lyrical inspiration for "The Holographic Principle": "'The Holographic Principle' deals with the near future wherein virtual reality has taken off and allows people to create their own virtual worlds which can't be distinguished from 'reality as we know it.' This raises the question whether our current reality is a kind of virtual reality on itself, a hologram. This implies the existence of a higher reality which we currently do not have access to. The lyrics challenge you to think out of the box, to reconsider everything you thought to know for sure and to be open-minded towards recent revolutions in science. Fasten your seat belts and get ready for a ride as nothing appears to be what it seems in our holographic universe."

Speaking to Spark TV, which is part of the Czech monthly magazine Spark, EPICA singer Simone Simons stated about the follow-up to 2014's "The Quantum Enigma": "It's a huge amount of songs, it's a lot of information, it's a lot to take in, but we put everything in this record and we hope that it will pay off and that the people will feel what we feel when we listen to it."

Simone also praised the contributions of Isaac Delahaye, who came into the band in 2009. "The guitars are definitely more brutal," she said. "Also in the mix, the melodies, the grooves, and I think that ever since Isaac joined the band, not only as a songwriter but also the guitars have been lifted to a different level, and have become more interesting to listen to, I find myself. So I'm a big fan of his guitar work and also his songwriting."