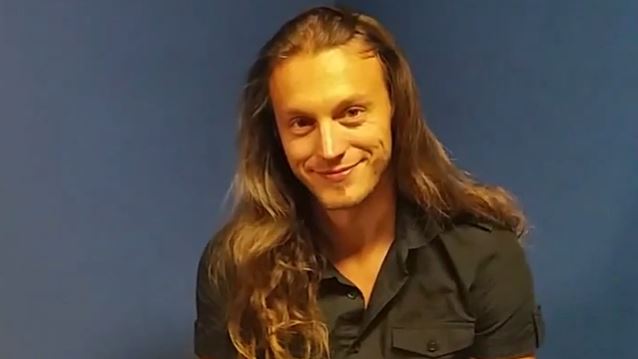 Metal Wani's Sandra C Yeomans recently conducted an interview with guitarist/vocalist Mark Jansen of Dutch symphonic metallers EPICA. You can now watch the chat below. A couple of excerpts follow (transcribed by BLABBERMOUTH.NET).

On the EPICA songwriting process:

"We sit down [separately] and we start writing. And then, after a while, we have quite some songs. And then we sit together with our producer, and we go through the songs. He adds some things here and here, he says which songs are strong, which songs are not, and we drop them. Because we are working already on the next album. We have now 25 songs already laying there, to be finished. The next step is to work on the vocal lines. And then we already can record the demo versions. And from there on, we start rehearsing, and then we are ready to record the album."

On the progress of the songwriting sessions for EPICA's follow-up to 2014's "The Quantum Enigma":

"It will be a hard decision, because we have 25 killer tracks. And we recently came together as a band and sat down and listened to all the tracks we wrote. And, yeah, it's gonna be a very hard decision, because the quality is really high. Sometimes you are happy when you can fill an album with killer tracks, but now we have the luxurious position we are in that we have at least that many great tracks, so we have to drop tracks that normally would have been for sure on an album… We have to decide what to do with [the extra tracks], because there are many options. I would like to use them right away. It feels shit to wait three more years for a song that's already great to get released. So let's see. But everything is a possibility."

EPICA last week canceled the remaining dates on its North American headlining tour so that the band's lead singer, Simone Simons, could be by her father's side while he was "fighting for his life." (He is now "slowly recovering," according to Simone.)

EPICA will reschedule its North American tour for early next year.

The group's fall 2015 run was supposed to mark EPICA's long-awaited return to North America after their tour with MACHINE HEAD in late 2014 got canceled. It was also to be the band's first North American trek in support of their latest album, "The Quantum Enigma", which hit the charts all over Europe and beyond.