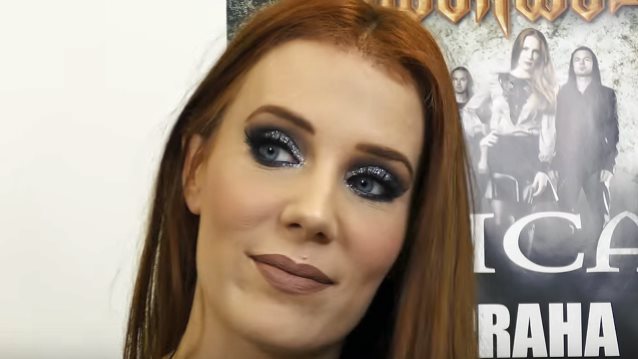 Spark TV, which is part of the Czech monthly magazine Spark, has uploaded a stage makeup tutorial with Simone Simons of the Dutch symphonic metal band EPICA. The clip, which was recorded on January 28 in Prague during EPICA's European tour with POWERWOLF and BEYOND THE BLACK, can be seen below.

In between touring and recording with EPICA and spending time with her family, Simone runs a blog called SmoonStyle, where she documents all the neat little things happening in her life, and particularly her love of makeup, fashion, and food. It

Asked what it is about makeup and beauty that still excites her, Simone told the Metal Obsession web site: "Well, I always loved doing makeup and getting dressed up for carnival and stuff like that. I'm very girly when it comes to that. It's my luck that with EPICA I can explore that even more because I can wear looks that I couldn't wear out, you know, going grocery shopping. [Laughs] So I can go more extreme; I can be more creative. I have been doing my hair and makeup, with the exclusion of maybe ten times, myself over the last thirteen years, and I've learned a lot from it. I enjoy it. It's a nice addition that comes with being a singer, being an artist. And my blog is now, I believe, [six] years old. I had lots of questions from fans asking me about what do you wear for makeup, where do you buy your clothes?"

Later this month, EPICA will hit the road again and will perform full headline shows in Russia, Scandinavia, Finland, Asia and Latin America.