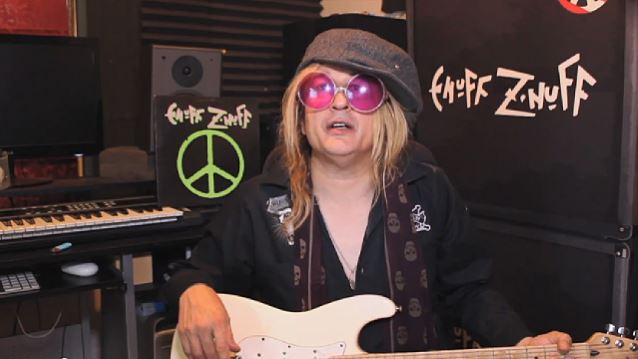 Jason Price of Icon Vs. Icon recently conducted an interview with Chip Z'Nuff of ENUFF Z'NUFF. A couple of excerpts from the chat follow below.

Icon Vs. Icon: ENUFF Z'NUFF is putting out a covers collection titled "Covered In Gold". What made this the right time for the release of this album?

Chip: It was our management. Todd LePere, over at PRG Nocturne, has taken the band under his wing. We haven't had a North American label in 15 years. I'm signed with King Records over in Japan and ENUFF Z'NUFF is with Rock Candy over in England but we had nothing here in the United States for the longest time. Everybody wanted the record for free. Finally, we found Cleopatra Records. They called me up one day and said, "We licensed your greatest-hits record, 'Favorites', and it has done very well for us. I always liked working with you, Chip. Do you have any music?" I told him we didn't have a lot at the moment, just demo stuff, but quality record stuff. It is very important to have music that is going to hold up sonically. I said, "I do have a covers record I am thinking about putting out. I would like to take all of these cover songs we have done in our career and put them on one record. Maybe we could record three or four extra songs for it. Would you be interested in that?" He said, "Absolutely!" I sent him the record and he nailed it! It was the perfect time. It's, like I said earlier, preparation meets opportunity. He had the songs and wanted to put the record together. I went over to Chicago Recording Company on the north side of Chicago. They were nice enough to give me the studio for a week. I put the songs together and I think there has been a resurgence with ENUFF Z'NUFF. We have certainly been helped through radio and TV. I host a TV show here in Chicago called "Mancow TV". I think that has helped where people have seen us and know the band is still alive and playing shows. That whole combination made it a great time for this to come out. The record came out and it was at 54 its first week on Amazon and shot itself up to No. 28. It has been pretty good for us so far! I think the way to sustain that would be to go out and tour a little bit this year and then come out with a brand new record next year. That is my goal right now, to put out some fresh new music for the fans in 2015. They certainly have been very loyal to us. Our audience has always bought our albums and passed them around to their friends. If you go to a record store, you don't see us in the used bins because people keep our albums and we are really proud of that! I would definitely like to see a brand new, fresh record out. I was a little concerned about doing it because it is a different lineup right now, but the fans have spoken! Next year I am looking forward to putting some fresh new music out and hopefully "Covered In Gold" will hold everybody over.

Icon Vs. Icon: Where are you in the process of creating the album of new material for ENUFF Z'NUFF? Are you the type of artist who is always writing?

Chip: No, I'm not always writing because I am always in the studio producing other bands and helping other artists that need a helping hand. It is very challenging to find a new group and have them say, "Hey, we want to pay you to come into your studio to record our songs. Will you help us?" I give them everything I've got, all the bands that come in. I have produced over 30 albums at my house. It is very gratifying at the end when you see how happy they are. They see how it is done and I can really help them in a lot of ways because I have been making records for all these years. That feels really good. As far as songs go, John Lennon said it best, "All the great songs have already been written. It is up to us as artists to bring them down and turn you guys on to them." There are a bunch of songs that we have, so that is the least of my worries.

Icon Vs. Icon: Is sharing your life and experiences in the form an autobiography something that is in the cards for you?

Chip: Yeah, I have been working on it for the whole year, actually. It takes a lot of time. People think that you simply put a book together and put it out. No. It is trial and error. It is a bunch of stories and you have to find someone to help take your words and put it together in a way that is cohesive. I have this guy named James Reardon, who wrote "Break On Through". He wrote the book on THE DOORS and worked with Oliver Stone when they did "The Doors" movie. The whole movie is based on his book. I just got him involved to help me put this book together. I have another person who is on The New York Times best sellers list named Jodee Blanco, who wrote "Please Stop Laughing At Me". Those two are helping me put this great story together. It is all true, no phony stuff. It shows the warts, scars and tattoos I have acquired through the years with my band, ENUFF Z'NUFF.

Icon Vs. Icon: Did you have any reservations about putting yourself out there in that capacity?

Chip: I did at first, but when I knew I was going to bring up some other people ... I am not talking about other bands and their substance abuse or promiscuity. I am talking about my life and my band. I really had to let my hair down on this, for lack of a better term. I wanted to talk about the problems, trials and tribulations of being in ENUFF Z'NUFF and the very first days of substance abuse this band carried with us through the years. Even though we had issues, we had great songs and four guys who really knew how to play together and had a great chemistry. Along with the good stuff, I wanted to show all the bad stuff like the drug abuse and promiscuity, on both sides of my marriages, and my band's relationships. I also wanted to focus on the people in the record company, in the very beginning, thinking that was the way to go to vibe with everybody to shows where band members weren't up to snuff at gigs and we doing less-than-desirable shows with a great band. We were just not in the condition to play as great as we were on the records. We went through bankruptcies, signed with Clive Davis over at Arista and sold a couple hundred thousand records, which is considered a failure back then. Nowadays, I would be hailed for seeing over 200,000 records! We had two gold records and were in debt three quarters of a million dollars. There are embarrassing moments in there as well. I talked about all those things because I wanted to be honest. I have to be honest with ya, some of it hurt. It wasn't an easy ride or an easy book to start putting together. However, I am cleansing my soul. It's kind of like Steven Adler from GUNS N' ROSES, when he wrote his book. I was with him when he was writing the book. When it was finished, he had the first copy. I was so proud of him for putting all of that stuff down on paper. He went over and lit the fireplace. He threw the book in and said, "OK. This story is done. Those chapters of my life have diminished. I have the memories and my fans can remember these if they want to but I am on to the next thing!" That is how I look at the book I am working on.