Swedish metal veterans ENTOMBED are among twelve artists who have been selected as the inaugural inductees in the Swedish Music Hall Of Fame.

The artists were chosen because they all made "lasting contributions to Swedish music," organizers said in Thursday's (February 6) announcement.

"We want to act a bit like teachers, and demonstrate the history and significance of Swedish music," said music journalist Jan Gradvall, chairman of the three-person jury that picked the Swedish Music Hall Of Famers.

"We want to build bridges between genres and generations and give Swedish music the place it deserves," he added, according to The Local.

Set to open on March 20, the Swedish Music Hall Of Fame is situated on Djurgården by the recently opened ABBA museum.

For an artist to be elected to the Swedish Music Hall Of Fame, 20 years must have passed since their debut album in order to "guarantee an enduring historical value."

"Back To The Front", the album that was recorded last year by four members of the most recent lineup of ENTOMBED — Lars Göran Petrov (vocals), Olle Dahlstedt (drums), Nico Elgstrand (guitar) and Victor Brandt (bass) — will be released this coming spring via Century Media Records under the band name ENTOMBED A.D.

Century Media Records announced last fall that the release date of "Back To The Front" — which was originally supposed to be made available under the ENTOMBED moniker — was being pushed back to early 2014 from the previously announced October 29, 2013 due to "unpredictable technical problems."

Asked in an interview with France's MetalChroniques.fr if the omission of Hellid's name from the ENTOMBED biography accompanying a promotional copy of "Back To The Front" was a mistake on the record label's part, Petrov replied: "I do not want to speak publicly about this at the moment; this is something we want to keep internal and private for now. But this is not an error in the biography. Next question?"

Hellid did not accompany the Petrov-fronted lineup of ENTOMBED when the band performed at the Manizales Grita Rock festival in Colombia in August 2013. 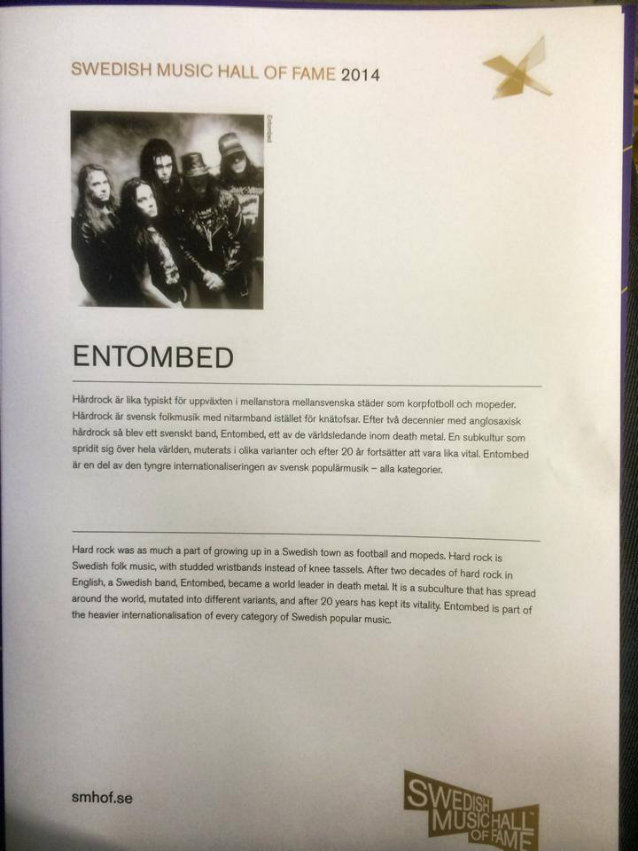