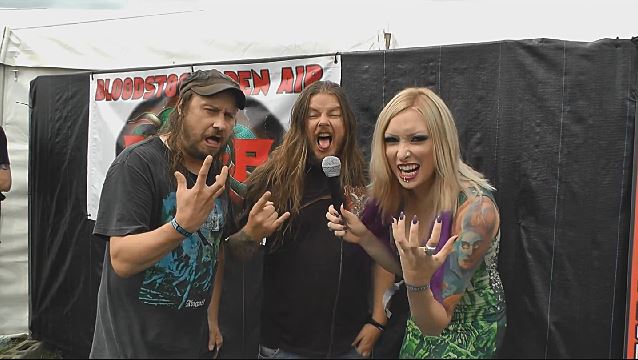 Hayley Leggs of TotalRock Radio conducted an interview with ENTOMBED A.D. guitarist Nico Elgstrand and vocalist Lars Göran Petrov at this year's edition of the Bloodstock Open Air festival, which was held August 7-10 at Catton Hall, Walton-On-Trent, West Midlands, United Kingdom. You can now watch the chat below.

Speaking about the difference in ENTOMBED's sound since the addition of "A.D." to the the band's name, Nico said: "There isn't a difference, really. I mean, I've been with the band for 10 years. We've been doing what we have been doing as always, just now we're gonna get a bit more busy doing it properly as opposed to, like… I mean, seven years between every album, that's nonsense; you have to be just a bit quicker than that. So, from now on, it's gonna be as it should be."

In a recent interview with Metal Underground, Elgstrand stated about the legal issues that forced the ENTOMBED name change: "We've had some internal turmoil that resulted in a separation of Alex [Hellid, guitar] from the band. [It] turns out he didn't wanna make music and tour on it. [We're] still not sure what the hell he wants to do! When we were about to release the album, he started bringing in lawyers and claimed that the name ENTOMBED belongs to him. Which, of course, it doesn't, but instead of getting into a lawsuit that would've gone on for a long time and wouldn't have made anyone happy except a bunch of lawyers, we decided to add 'A.D.' to the name and get on with what were supposed to do, which is making music and touring as a band. As of now, the name ENTOMBED is on hold for anyone to use until people involved come to a solution. Unfortunately, it doesn't seem to happen in the near future."