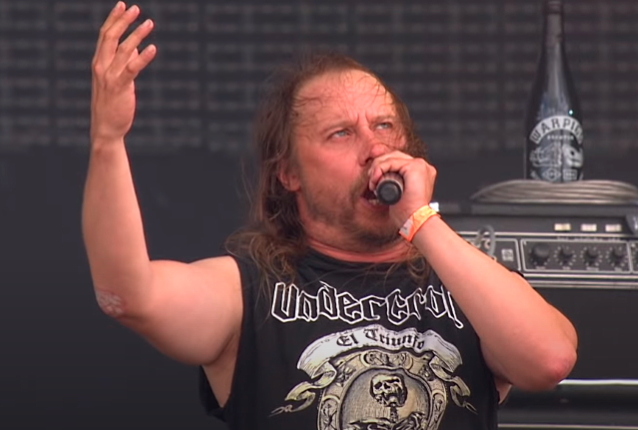 The news of the Swedish musician's health setback was broken earlier today on ENTOMBED A.D.'s social media. The band shared a photo of Petrov at what appears to be a treatment center, and included the following message: "Sad news.. LG Petrov has been struck by cancer and he is undergoing chemo treatment to try and control it. Our thoughts and and strength goes out to our brother. If you want to support him In these hard times, click on the link in the Bio and feel free to donate. #fuckcancer #fightforlifeandmetal"

In a message on his GoFundMe page, Petrov wrote: "I've been hit with uncureable cancer (gallvägscancer in Swedish), and have been battling it for some time now. It can't be removed but the doctors are trying to control it with chemo therapy. Life takes its weird turns..."

Petrov is apparently battling cancer of the bile duct (also called cholangiocarcinoma), which is extremely rare. In most patients, the tumor cannot be completely removed by surgery and is incurable. Palliative measures such as resection, radiation therapy or stenting procedures may maintain adequate biliary drainage and allow for improved quality of life.

"[ENTOMBED and ENTOMBED A.D. are] the same thing — just some minor complications on the way," Petrov told Finland's Rauta. "But we are here and playing music and headbanging, and that's the most important. But it's the same. It's the same."

Sad news.. LG Petrov has been struck by cancer and he is undergoing chemo treatment to try and control it. Our thoughts...