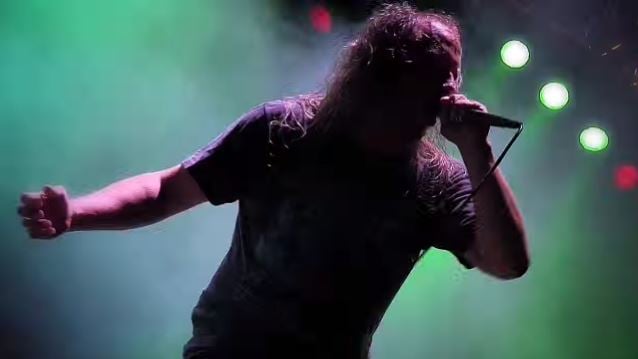 Revolution-Music.dk conducted an interview with vocalist Lars Göran Petrov of Swedish metallers ENTOMBED A.D. at the Aalborg Metal Festival on November 8 at the Studenterhuset in Aalborg, Denmark. You can now listen to the chat using the audio player below. A couple of excerpts follow (transcribed by BLABBERMOUTH.NET).

On recording and releasing a new album, "Back To The Front", under the name ENTOMBED A.D. in order to avoid a legal battle with ENTOMBED guitarist Alex Hellid who didn't want his former bandmates to use the ENTOMBED moniker:

"It had to be done, because without an album you can't tour. I mean, you can tour, but if there's seven years between albums, it's ridiculously long. So we did the right thing, and we did what bands should do, and still do — release an album and go on tour and headbang and have a good time with friends, and that's what it's all about."

"There was too much bullshit — crying and whining about things. It's just ridiculous.

On whether he thinks the ENTOMBED name has been damaged as a result of the drama surrounding the split with Alex Hellid and the decision to release an album as ENTOMBED A.D.:

"Nah, not really. A thousand people have a thousand different opinions — good and bad. But we do what we felt was right. And we're out here touring, and that's the most important [thing], I think. And leave the childishness aside and play metal, basically."

On the relationship with ENTOMBED A.D.'s record label, Century Media:

"We had contact with them for many years, but it was Alex had it, and when he took care of things, there was a lot of talk, but nothing ever happened, basically. [Laughs] And when they contacted us, things happened straight away.

"When professionals work with each other, things happen. And it's about will as well — you have to want to do it. I mean, this is what we do.

"Century Media is great people and they helped us out a lot. The record came out, and here we are. We have communication [with them] all the time.

"When you get a mail [from them], you don't wait two weeks, you answer the next day. So we have a steady communication, and that's the most important thing."

"Back To The Front" was released on August 5 via Century Media Records. The CD was recorded at Studio Bohus (ABBA, EUROPE) in Kungälv, Sweden with producer Roberto Laghi (IN FLAMES, HARDCORE SUPERSTAR). The cover artwork was painted by Zbigniew Bielak (WATAIN, VADER).