"The Watcher", the new video from Norwegian masters of progressive/experimental metal ENSLAVED, can be viewed below. The clip was shot in Gothenburg, Sweden with Revolver Film Company director and Norwegian award-winner Patric Ullaeus (DIMMU BORGIR, KEEP OF KALESSIN, IN FLAMES).

Commented the band: "When we got the chance to work with Patric and Revolver, we grasped it with all ten hands. His works are very impressive. We were first exposed to him through DIMMU's latest video — the whole thing was very professional and remained 'tasty' within the fantasy framework. Our previous videos have been do-it-yourself and we have never worked with special effects on such a high level before. The video is built upon a dual development: the band performing the song in parallel with a story line. The story is based upon [lead singer/bassist] Grutle's lyrics for 'The Watcher' and the story is written out in a co-operation between Grutle and [guitarist/songwriter] Ivar [Bjørnson] from the band, and director Patric Ullaeus. Without spoiling the surprise, the video story follows the lines of the lyrics — the individual's struggle for truth and liberation, about revealing the real chains of existence and breaking them."

"The Watcher" comes off ENSLAVED's latest album, "Vertebrae", which sold around 1,100 copies in the United States in its first week of release, according to Nielsen SoundScan. The CD debuted at No. 11 on the Billboard Hard Music chart and at No. 49 on the Top New Artist Albums (Heatseekers) chart, which lists the best-selling albums by new and developing artists, defined as those who have never appeared in the Top 100 of The Billboard 200.

Make sure you also tune in this Friday, December 5, 2008 to www.ligx.de to check out a free online video concert stream featuring ENSLAVED. Everyone around the world will be able to view the band's performance live on the web from Markthalle in Hamburg, Germany. The free concert stream should start around 8:00 p.m. German time, which, in North American time, should be 11:00 a.m. (Pacific), 12:00 p.m. (Mountain), 1:00 p.m. (Central), and 2:00 p.m.(Eastern). 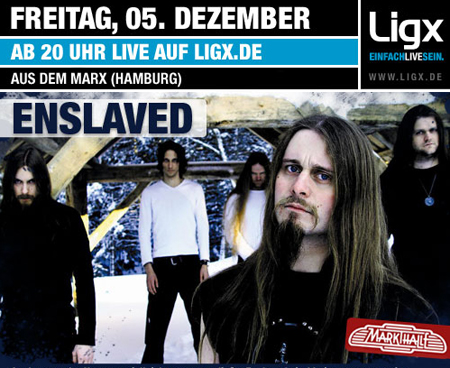