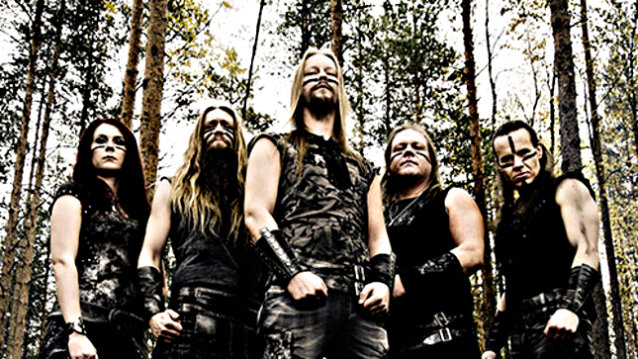 Finnish folk metallers ENSIFERUM recently entered the Astia studio in Lappeenranta, Finland to record a few demo songs for their upcoming seventh full-length album, due in September via Metal Blade Records. The quintet will soon return to the Astia to begin tracking the disc, which will be produced once again by Anssi Kippo (CHILDREN OF BODOM, IMPALED NAZARENE, ENTWINE).

ENSIFERUM bassist Sami Hinkka comments: "So, as some of you might have already noticed from our social media channels, we are getting ready to go record the next ENSIFERUM album pretty soon.

"Just a few weeks ago, we recorded demo versions with Anssi Kippo, who also recorded and produced 'One Man Army'. The demo session went smoothly, and working with Anssi is always such a pleasure because he is so full of creative ideas and positive attitude.

"The goal for the new album will be to capture ENSIFERUM's live energy on the songs, and we also plan to use analog recording as much as possible to guarantee the best possible sound.

"The song material will include familiar elements, but like we always love to do, we will also take ENSIFERUM's mighty warship to unexplored seas of musical madness."