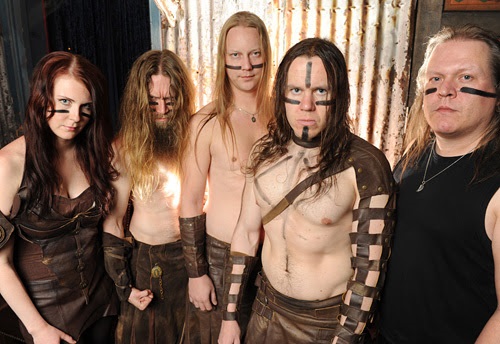 Finnish folk metallers ENSIFERUM have spent the summer of 2014 on tour in Europe, and will also perform in Japan this winter. In the midst of bringing its melodic folk-infused attack to stages worldwide, the band has been crafting songs for its sixth studio album (their Metal Blade debut), and the writing process is nearing completion. They plan to record the new album in September and October of this year with producer Anssi Kippo at Astia Studio in Finland. The release date is tentatively scheduled for early 2015.

Comments ENSIFERUM bassist Sami Hinkka: "They say that time flies when you are having a good time and we couldn't agree more.

"We have been quite busy touring around the world since our previous album came out few years ago. Between tours, we have worked hard with new songs and now we are very proud to announce that ENSIFERUM will hit studio again right after summer festival season.

"On the new album, we will take everything to eleven. It's going to be fast, furious, epic and full of surprises, but, of course, there will be classic ENSIFERUM elements included.

"We will do the album with the one and only Mr. Anssi Kippo. Pre-production is already going really well and in few weeks we will record another demo of all new songs. Then it's time to continue twisting and turning all the details so that in early 2015 our fans on every continent can be sure to get in their hands the best folk metal album ever made."