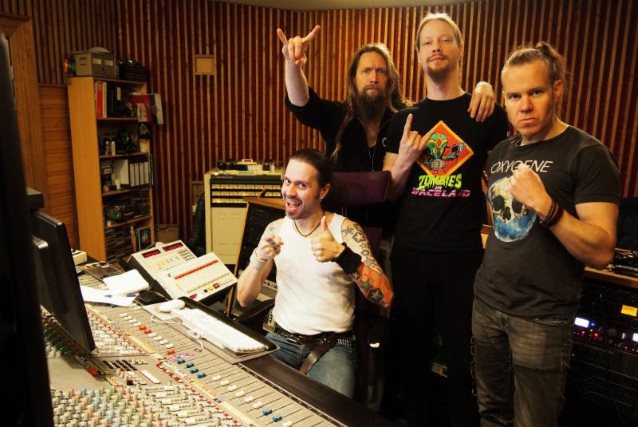 Finnish folk metallers ENSIFERUM recently entered the Astia studio in Lappeenranta, Finland to record their seventh full-length album, due in September via Metal Blade Records. The disc is being produced once again by Anssi Kippo, who has previously worked with CHILDREN OF BODOM, IMPALED NAZARENE and ENTWINE, among others.

ENSIFERUM bassist Sami Hinkka comments: "For this album, we wanted to catch our live energy on a totally new level with the best possible sound. So every song was played together while recording drums. Most of the bass lines were also taken from those live takes to guarantee the maximum groove. There are songs on the album we recorded without a click so get ready for some serious rocking, people!

"Since Anssi Kippo is such a studio wizard, he has synced his legendary Otari MTR-90mk2 2" 24 tape recording machine (recognizable, for example, from METALLICA's 'Nothing Else Matters' video) with his computer, so we will record drums, bass, rhythm guitars and lead vocals on tape, and the rest that can't fit on the tape, we'll record on computer. Also the mixing will be done the analogue way on tape to make sure that the sound will remain as raw, punchy and as unprocessed as possible.

"The second week is almost over and we are perfectly on schedule: drums, bass lines and half of the rhythm guitars are done.

"We are doing 12-hour-long days, so unfortunately this time there won't be 'beer of the week' or any fooling around video diaries, but there will be plenty of time for that after the album is done and the touring starts again."