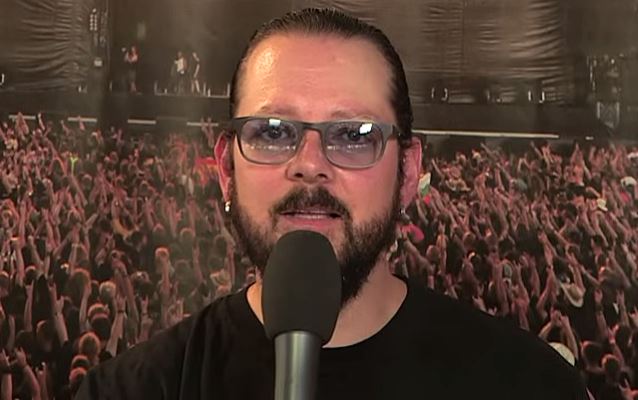 ARTE Concert conducted an interview with Ihsahn (real name: Vegard Sverre Tveitan) of reunited Norwegian black metallers EMPEROR at this year's Wacken Open Air festival, which was held July 31 - August 2 in Wacken, Germany. You can now watch the chat below.

On celebrating the 20th anniversary of EMPEROR's "In The Nightside Eclipse" album:

Ihsahn: "This is kind of a special set, because these are, basically, very old songs, because this is the celebration of the 20th anniversary of our first album. So we're kind of doing that whole album as a whole. And these are songs that we wrote when I was, like, 16 or 17. So at first I thought it would kind of be hard to connect with those songs, since it's such a long time ago, but for some reason, I think it's kind of in your spine. So I think it's important just to try and link back to that feeling you had when you wrote them and had those songs in the first place and try to connect with that and just do that thing and not think too much about it."

On where the appeal lies in EMPEROR's music:

Ihsahn: "It's not music for everyone. [laughs] But I think [that goes] for all kinds of music that are not typical radio-hit music. I think even classical music and opera, you kind of have to understand the format before you can actually enjoy it. I think it's very hard for people to actually connect with the rhythm of everything and find that underlying pulse of the music. Maybe that's why metal fans are so dedicated as well, because this is kind of a demanding genre of music; you kind of have to invest the time and undertand it. You kind of have to build a relationship to it; it's not the kind of quick-fix music that much radio music is supposed to be."

On why he thinks EMPEROR's music has connected with so many people over the years:

Ihsahn: "I think the reason we're in the position that we can come here and play to such a big crowd with this old material and that EMPEROR is a phenomenon, almost, and kind of regardless of us, has a life of its own, is that we were very uncompromising, we never compromised, we never tried to fit into anything. Quit the contrary, I would say, especially in the beginning. We thought our music was very extreme and exclusive for a limited audience, and we never aspired to make it anything big. So it's kind of a paradox that we actually ended up doing something like this. We're just enjoying ourselves and kind of sharing this experience together. We think back when we were teenagers, and this was unimaginable. And now we get to do it. [laughs]"