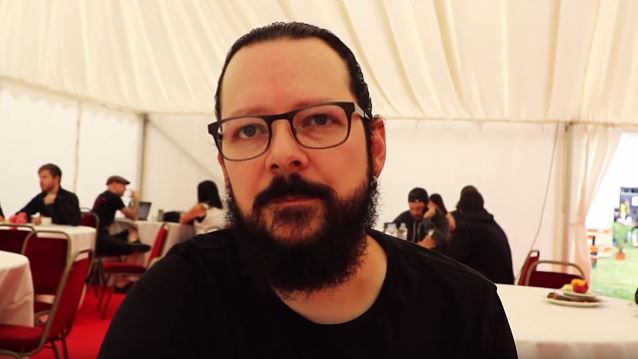 Jägermeister conducted an interview with EMPEROR frontman Ihsahn (real name: Vegard Sverre Tveitan) at this year's Bloodstock Open Air, which is being held August 6-9 at Catton Park, Derbyshire, United Kingdom. You can now watch the chat below. A couple of excerpts follow (transcribed by BLABBERMOUTH.NET).

On when he finds the time to work on new music:

"'Cause I have kids and I have a family now, it's really… I start early and go into the studio and start working on my music. And I work from 8 [a.m.] to 4 [p.m.]. That may sound a bit metaphysical, but it's kind of… Even though I've been doing this for 25 years or so now, it's still… It's a point kind of inside and far ahead that every song is kind of an attempt to fulfill something; there's a need there that has been constant ever since I started writing music. And that sounds a bit 'off,' I know, but… It's very vague, but it's just the driving force that never escapes."

On his songwriting approach:

"It's not like I'm overly productive, that I write all the time. I mean, that kind of need is always there. I try to be flexible, and at least I try to challenge myself to do things in a different way and work with music in different ways, to keep that interest and excitement going. 'Cause that's when I think that I do my best work, and it's probably how my music, hopefully, can be worthwhile listening to as well… It's just, kind of, changing up my routines and how I approach the writing of a new album. So, especially since I stopped being in a band and started going solo, for every album that I've done, I've kind of written out, almost a framework about the musical concept and the instrumentation I want to use, to kind of… not limit my options, but to kind of focus in on some type of state of mind. That I try to keep different for each album. It's, like, my previous album is really far out, in my experience; I'm doing a little bit more improvised work and different sounds. And I'm working on a new album now that is kind of quite the contrary — really typical song structures."