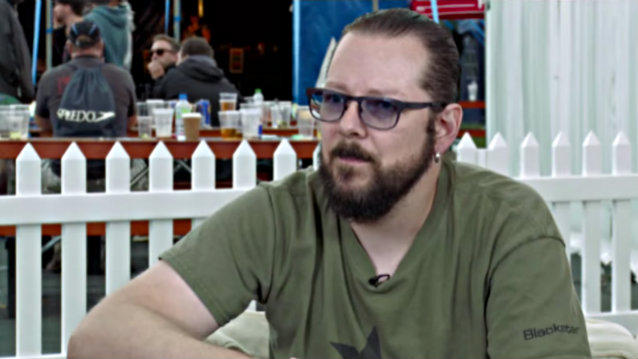 Asked about EMPEROR's decision to reunite for less than a dozen shows to celebrate the 20th anniversary of the band's "In The Nightside Eclipse" album, Ihsahn said: "We did a [reunion] thing in 2006 and 2007, but that was kind of a collection of songs from our whole career; it was really just doing a small tour that we never got to do after the last EMPEROR album. And [this time] we discussed it [beforehand]. Especially for me personally, I didn't want to do the same thing over again — and keep reuniting. That's not my cup of tea, if you will. And since I've always been busy in the meantime, I've been trying to be very conscious about the way you communicate this to your listeners, that I'm still trying my best with my own material. I don't wanna give the message that this is second rate [and I wanted to let everyone know that] the focus there is not just this nostalgia. But at this point, it's kind of… 'In The Nightside Eclipse' was kind of our starting point, so, for us, it's kind of a big deal. It's the starting point of us being able to do this for 20 years… against all odds. I mean, how many have come out of Norway at all [before we first came onto the scene]."

Regarding where EMPEROR is planning on doing any more shows in the coming months, Ihsahn said: "No, there's nothing planned. I mean, that was kind of the main goal for this — to keep it very limited, not get greedy about it or anything, because, obviously, there's quite a lot of money involved. First and foremost, before we even booked one show, we said, 'Okay, let's keep this limited, let's get Faust [Bård Eithun] back in to perform the original drumming, and his style of drumming, and let's not repeat what we did before. Let's do something… This is a celebration for us and those who have a relationship to that album, and just make the most of it, but keep it limited and not overdo anything.' Also, of course we're doing some pyros and we're putting on a bit of a show, but at the same time, in the same spirit. 'Cause the people in the organization [wanted to] bring out this huge crew and everything. And I said, you have to remember, 'In The Nightside Eclipse', it's very DIY. We literally took all the pictures and put together the cover [using] glue and scissors. That's kind of how we worked back then. There were no big budgets, there were no producers or anything, it was just very DIY. So I said, for this album, let's keep that in mind and keep it simple and kind of connect with that. Because that's what it's all about. This is not rocket science. This is quite easy stuff. And when I travel with my solo stuff, which in essence is much more complicated to perform on a stage, that's where I will need a lot of crew. But this time, we're very comfortable that we have a great crew with us, all people we know from before mostly, and everybody is [on] the same wavelength of keeping a very relaxed atmosphere to everything and trying to enjoy the process as much as possible. And I think that kind of gives it a bit of peace as well, that this is not something that you have to take responsibility. Everybody knows what they're doing and then it's the end and it's all good and it's finished."